J. Gresham Machen: A Guided Tour of His Life and Thought by Stephen J. Nichols 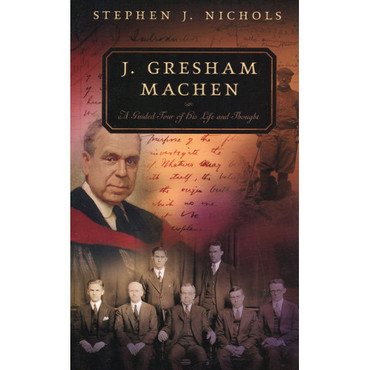 J. Gresham Machen: A Guided Tour of His Life and Thought by Stephen J. Nichols

Following three chapters devoted to Machen’s life, Nichols examines Machen’s writings on theology and the Bible, on culture, and on the church (including several sermons). A select guide to books by and about Machen, a bibliography, and indexes conclude this accessible introduction to one of the twentieth century’s most important theologians.

Part 2: Machen as Scholar: Writings on Theology and the Bible

4. An Admirable Book: Christianity and Liberalism

5. Defender of the Faith: What Is Faith?

6. A Legacy of Scholarship: The Origin of Paul’s Religion and The Virgin Birth of Christ

7. Radically Ethical: Machen on Culture, Politics, and the Environment

8. The Great War: Machen and World War I

Part 4: Machen as Churchman: Writings on the Church and Sermons

10. A Doctrinal Church: Machen, Missions, and the Church

12. The Cross of Christ: Select Sermons from December 1936

"J. Gresham Machen's writing was as clear as his arguments were persuasive. Nichols has accomplished the rare feat of making Machen even more accessible. For readers unfamiliar with machen, this is the perfect appetizer to the feast of further study in Machen's writings. For those more knowledgeable, this will be a reliable reference." - Darryl Hart

"Stephen Nichols has done a fine job of presenting an accessible introduction to the life and thought of J. Gresham Machen. Nichols offers lucid expositions and fresh interpretations based on his own research." - George M. Marsden