The Christian View of Man by J. Gresham Machen (Paperback) 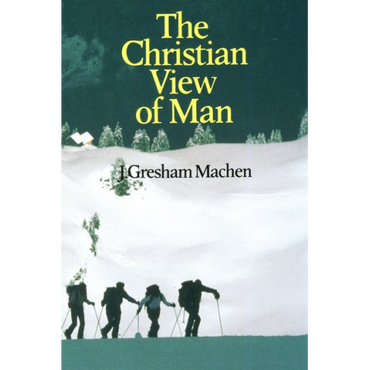 The Christian View of Man by J. Gresham Machen (Paperback)

J. Gresham Machen (1881-1937) was an outstanding New Testament scholar and the founder of Westminster Theological Seminary, Philadelphia, USA. In a line of great American reformed theologians, he above all stands out as the master of a forceful literary style.

The question: What is Man? which arose centuries ago in the Psalms remains one of the most vital issues faced by present-day man.

Bewildered by technological advance, alienated from the convictions and lifestyle of his forefathers, modern man has lost his place in the universe. The echoes of his bewilderment can be heard everywhere, from the city graffiti to the rock songs, subcultures and new religions of our time.

Yet there is an answer to man’s identity crisis. Man is made by God, in his image, for his glory. This truth with all its implications, is the theme of Gresham Machen’s popular presentation of The Christian View of Man. It explains, for Christians and non-Christians alike, how the Bible serves as a mirror to show us who we are. In simple yet careful language, Machen deals with such subjects as creation, man as the image of God, the fall, sin, God’s providence and care, and God’s restoring grace.

Allow me to say up front that as a great admirer of Machen, I don't believe that this particular book was his best. Because it is a compilation of a series of 'talks' delivered via radio during the 1930s, the consolidated written form does not read as well as a manuscript written specifically for a reading audience, rather than a listening audience. But the actual content of what Machen discusses here is outstanding and like much of his published material from decades past, is in desperate need of being heard today.
Because this book is a compilation of timed radio talks, each chapter of the book is short, about 10 pages each. As is typical of Machen, even in a book like this that purports to discuss the Christian view of man, Machen devotes many of the early chapters to discussing God rather than man. Machen held a great resentment, properly so, of theologies and worldviews that glorified man which masqueraded as products of the Christian tradition. As such, even in a discussion about man, Machen very deliberately makes God the focus, particularly in the early chapters. It is here that the nature of God is discussed, along with His decrees and His attributes, particularly where the creation in general and man in particular is concerned. In a discussion about man, the reader might think early on that Machen is not really dealing with the stated focus of the book, but he is as is seen by the later chapters.
It is in the last 7 chapters in particular where this book really becomes riveting, in my view. Machen's discussion of creation and the fall is very good. His treatment of original sin and its relationship to human responsibility is impeccable. His related critiques of Pelagianism, in all its forms, is devastating. Machen presents a very compelling case for the inability of man and the grace of God that intervenes in man's hopeless natural condition.
As I said at the beginning, this book, while excellent, is not his best or most important contribution. While Machen was obviously interested greatly in matters of theological purity, he also was a student of culture and current events. As a result, these talks touched upon a number of cultural issues that were current at that time and there are points in this book where Machen devotes considerable ink to discussing societal issues rather than strictly theological issues. While some of the societal issues discussed here are still pertinent today, the reader may at times sense that the book is at least somewhat dated in these areas, and I confess that some of those discussions seemed at least somewhat off topic, though I certainly acknowledge that my assertion here is debatable.
But in conclusion, this book still provides a much needed antidote to the man-exalting theologies that pack many pews in the American church today. Machen counters this trend with a solidly Biblical argument that confesses that it, like many faithfully Biblical arguments, will not win many popularity contests even among Christians. An important read on the nature of man and what that means relative to our relationship to God.