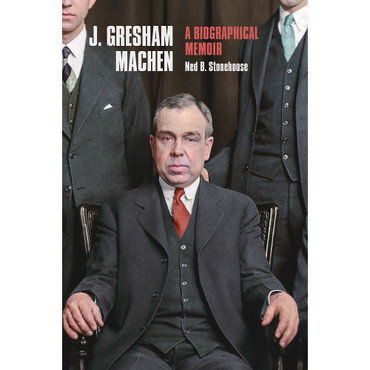 ERRATA NOTICE
It is with regret that the publisher informs readers that an error occurred in the production of this book. Please note that Chapters 10 and 11 have been inadvertently switched. Chapter 10, ‘Ordination and Installation,’ should have started at page 211, not at page 245.

BOOK DESCRIPTION
John Gresham Machen (1881–1937) was one of the most significant figures in the evangelical church throughout the twentieth century. He is best known through his vision for a truly evangelical presbyterian church in the USA, and as the founder of Westminster Theological Seminary, Pennsylvania.

Gifted with an incisive mind which was finely tuned to the highest level of scholarship, he placed above all else his concern for Christ’s gospel and the reliability of the Scriptures. For these he was prepared to suffer opposition, abuse, and even rejection.

In the Philadelphia seminary, Machen gathered around him a team of men, including Cornelius Van Til, Paul Woolley, John Murray, and Ned Stonehouse, whose work took on international significance, and brought guidance to Christian scholarship and wisdom to the entire Christian church.

Machen laid everything he possessed in tribute at the feet of Christ. He was, so to speak, a rich, young ruler in the church of God who sold all to follow his Master. He was deeply concerned to bring his warmhearted and accurate exposition of the gospel to the entire church. Such works of his as God Transcendent, The Christian View of Man, and An Introduction to the New Testament, have put many readers in his debt.

Ned Bernard Stonehouse (1902 – 1962) joined J. Gresham Machen in the founding of Westminster Theological Seminary in 1929, where he served for over thirty years as Professor of New Testament. He was one of the 34 constituting members of the Orthodox Presbyterian Church in 1936, having been a minister of the Presbyterian Church, USA, from 1932.