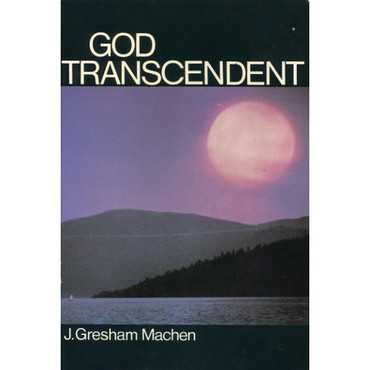 J. Gresham Machen ‘was one of the most colourful and controversial figures of his time, and it is doubtful that in the ecclesiastical world of the twenties and thirties any religious leader was more constantly in the limelight’. Machen was a scholar, Professor at Princeton and Westminster Seminaries, church leader, apologist for biblical Christianity, and one of the most eloquent defenders of the faith in the twentieth century.

God Transcendent is a collection of Machen’s addresses. It shows, perhaps more clearly than any of his books, why he was such a great man. In these messages, Machen expounds the greatness and glory of God, the wonder and power of the gospel and the exhilaration of serving Christ in the front line of spiritual warfare.They show why Machen fought so tenaciously for biblical truth against error: ‘It is impossible to be a true soldier of Jesus Christ and not fight’.

This series of popular messages, includes Machen’s famous address, The Active Obedience of Christ, delivered only weeks before his death on January 1, 1937.

John Gresham Machen was born at Baltimore on July 28, 1881, the middle of three sons born to a southern lawyer, Arthur Machen, whose brother had fought for the Confederates in the Civil War. Some time in his youth Machen came to a personal faith in Christ, but there was no dramatic conversion experience. In later years he was not even able to recall the date (4 January 1896) when he had publicly professed faith and become a church member in Franklin Street Presbyterian Church. He was educated at Johns Hopkins and Princeton Universities, Princeton Theological Seminary and the Universities of Marburg and Göttingen in Germany.

Machen taught at Princeton Seminary from 1906 until its reorganisation in 1929. Then he left to help found Westminster Theological Seminary in Philadelphia, where he served as professor of New Testament until his death from pneumonia on New Year’s Day, 1937. In 1936 Machen was instrumental with others in founding what became the Orthodox Presbyterian Church, and was its first Moderator.

Machen’s books published by the Trust are The Christian View of Man, What is Faith?, God Transcendent, and New Testament Introduction.