Letters from the Front by J. Gresham Machen (Paperback) 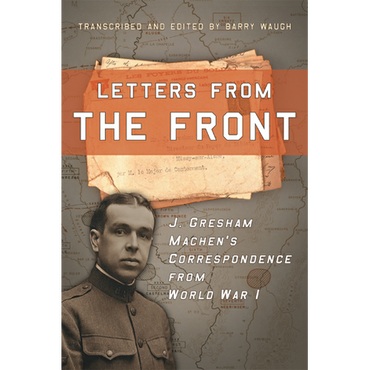 Letters from the Front by J. Gresham Machen (Paperback)

Never before published, here is a glimpse into the formative years of a great campaigner for the faith... and a stirring example of how the faith of a seminary professor was refined and strengthened through the trials of war.

J. Gresham Machen was a pivotal figure in American church history, involved in the founding of Westminster Theological Seminary in Philadelphia and the Orthodox Presbyterian Church.
Endorsements

“J. Gresham Machen is a fascinating, complex, and controversial figure. . . . What is often forgotten is that he was also a member of the generation of young men whose lives were forever changed by their exposure to the horrors of trench warfare in the First World War. This volume contains the letters that the young Machen wrote home as he served as a YMCA volunteer in the war. As such, they both offer important firsthand accounts of the conflict and also give us insights into some of the darker experiences that shaped the mind of the future church leader.”

“Doughboy accounts of their experiences in World War I are fairly common, but it is unusual to find the stories of those who offered assistance behind the trenches. Whether helping the wounded or working in the canteen, [J. Gresham Machen] ministered to the men as best he could. Machen’s compassion is truly amazing, and his letters home offer a wonderful glimpse of the service of one YMCA official.”

“From these rare letters the reader can see a fresh side of the great scholar. On the battlefields of France, he was simply known as a compassionate soul who brought solace to scores of suffering soldiers. For those who only know Machen the polemicist, this volume will showcase Machen the caregiver.”