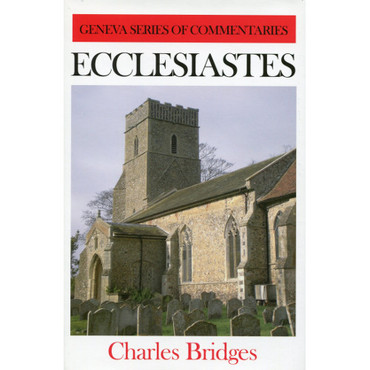 Charles Bridges’ commentary on Ecclesiastes shows that this neglected book of Scripture is:

Charles Bridges (1794-1869) was one of the leaders of the Evangelical party in the Church of England in the nineteenth century. He was the vicar of Old Newton, Suffolk, from 1823 to 1849, and later of Weymouth and Hinton Martell in Dorset.

Educated at Queen’s College, Cambridge, Bridges was ordained in 1817. As a preacher he was called upon for such important occasions as the Clerical Conference at Weston-super-Mare in 1858 (when he preached along with J. C. Ryle) and the consecration of the Bishop of Carlisle in York Minster in l860.

Renowned though he was in his own day for his pulpit ministry, his subsequent fame rests in the books which came from his pen – An Exposition of Psalm CXIX(1827), Forty-eight Scriptural Studies (5th ed. 1833), Fifty-four Scriptural Studies (1837), An Exposition of the Book of Proverbs (1846), a Manual for the Young (1849), and An Exposition of the Book of Ecclesiastes (1860). His The Christian Ministry went through nine editions within 20 years of its appearance in 1829 and has probably remained unequalled in its field. These works earned high commendation from many, including C. H. Spurgeon, who described all Bridge’s writings as ‘very suggestive to ministers.’

After his death a small selection of his correspondence was published in book form in 1870 and it reveals a man of deep Christian piety. ‘I never remember anyone,’ says the writer of the Foreword to The Christian Ministry, ‘in whose presence it was more difficult to be irreligious, or even frivolous.’

"The Scriptural method of exposition so well carried out by Bridges renders all his writings very suggestive to ministers. While explaining the passage in hand, he sets other portions of the word in new lights." — C.H. SPURGEON