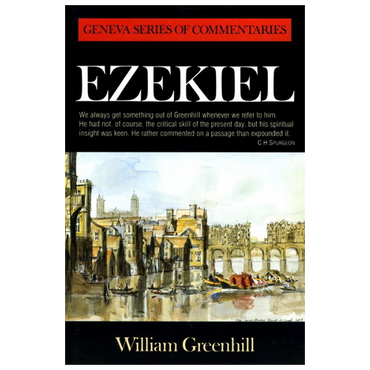 William Greenhill (1591-1671), author of the Exposition of Ezekiel published by the Trust in the Geneva series of commentaries, was born in Oxfordshire and educated at Magdalen College, Oxford, where he matriculated at the age of just thirteen years in 1604. He was elected a demy of Magdalen College the following year, graduated with a B.A. in 1608, and an M.A. in 1612.

From 1615 to 1633 Greenhill held the Magdalen College living of New Shoreham, Sussex. In 1643 he was a member of the Westminster Assembly, and about the same time became minister of the parish of Stepney, Middlesex, where, at one time, he lectured with his fellow Puritan, Jeremiah Burroughs. As Burroughs preached at seven in the morning and Greenhill at three in the afternoon they were known respectively as 'the Morning Star' and 'the Evening Star' of Stepney.

After the death of Charles I, Greenhill was appointed by the parliament as chaplain to three of the king s children: James, Duke of York (afterwards James II), Henry, Duke of Gloucester, and the Lady Henrietta Maria.

Greenhill was ejected from his parish immediately upon the Restoration in 1660, but he continued to serve a congregational church in Stepney until his death in 1671. John Howe referred to him as 'that eminent servant of God, Mr Greenhill, whose praise is still in the churches'.

‘We always get something out of Greenhill whenever we refer to him. He had not, of course, the critical skill of the present day, but his spiritual insight was keen. He rather commented on a passage than expounded it.’ — C.H. SPURGEON

Greenhill on Ezekiel, first published in five quarto volumes, constitutes one of the foremost of Puritan works in Old Testament exposition. Delivered to crowded congregations in the city of London, the content is popular and in the best seventeenth century tradition of experimental preaching which spoke to heart and conscience as well as the mind. It would be too much to say that Greenhill provides everything necessary for an understanding of this prophet but what he does give surely justified two nineteenth century editions. It is the best of these editions which is here reprinted.