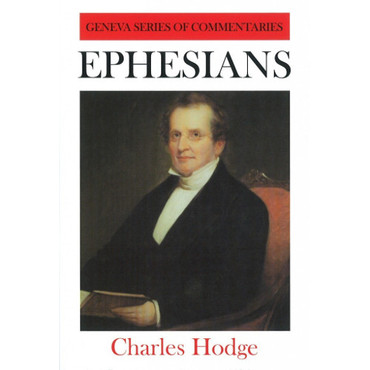 Scholar, educator, churchman, and distinguished American Presbyterian systematic theologian of the nineteenth century, Charles Hodge was born in Philadelphia in 1797. Following his father's untimely death a few years after he was born, Charles and his brother were raised by their godly widowed mother. In 1812 Hodge's mother moved the family to Princeton in hope of matriculating her sons at Princeton College.

Charles Hodge graduated from Princeton College in 1815. During the 1814-15 school year a revival broke out on the college campus: Charles was one of a number of students converted during this time of spiritual refreshing. At the encouragement of Archibald Alexander, he enrolled at Princeton Theological Seminary, graduating with the class of 1819.

Ordained in 1821, his scholarly gifts led to an appointment by his denomination in 1822 to serve as the seminary's third faculty member. As Professor of Oriental and Biblical Literature, Hodge's primary responsibility was instruction in biblical languages, hermeneutics, biblical criticism, and study of Old Testament texts. During 1826-28, he travelled to Europe to study with the leading European biblical and theological scholars. Hodge focused his studies on theology and biblical interpretation, with additional concentration in Semitic and cognate languages. His studies in Europe made him one of the leading Hebraists teaching in an American theological institution in the early nineteenth century. In the coming decade, Hodge would be assisted by the linguistic talent and philological expertise of Joseph Addison Alexander.

During his half-century tenure at Princeton, Charles Hodge held several chairs, but is probably best remembered for the reputation he established as Professor of Systematic Theology. A stout Calvinist with a deep love for the Reformed confessions, his literary labours often involved a polemical thrust, as he sought to defend and expound the Reformed theology of the Protestant Reformation, and the teachings of the Westminster Confession and the Larger and Shorter Catechisms, as received and adopted by the Presbyterian Church in the United States of America.

When Paul came to Ephesus in AD 54 it claimed to be the first city of Asia. Yet today the city is gone; and on the site of the Temple of Diana, which was the rallying-point of heathenism, is a stagnant pond. Ephesus is now known principally for its connection with the Christian Church- for Paul’s visit and his subsequent letter.

The epistle to the Ephesians is in many respects the profoundest of Paul’s writings. The grandeur of pagan learning and devotion pales by comparison with the Apostle’s mighty exposition of the truth as it is in Jesus. The great theme of Ephesians is the one church, the new spiritual temple God is erecting of Jew and Gentile. Because of its profundity and scope, it is one of the most demanding of books upon which adequately to comment.

Charles Hodge, whose commentaries on 1 and 2 Corinthians were among the earlier volumes in the Geneva Series, is qualified on several grounds to write on Ephesians. Though a competent linguist, his main interest was not in the field of textual criticism. Hodge, first and foremost, was a theologian, and without a mastery of systematic theology one cannot do justice to the early chapters of Ephesians. Reference may also be made to his noted piety and graciousness, his catholic spirit and his wide vision.

The great virtue of Hodge on Ephesians is his ability constantly to communicate the sense and overall argument of a passage. A peerless teacher, his aim, with the pen as in the classroom, was ‘the simple exhibition of the truth which God had revealed’- his own description of Paul’s preaching.