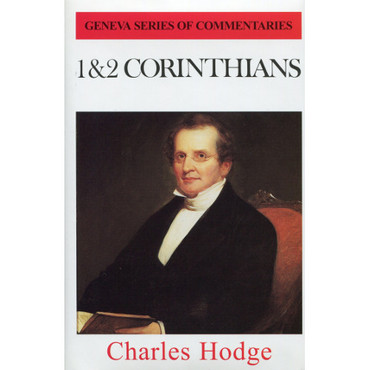 Charles Hodge’s work on 1 and 2 Corinthians, which is part of the Geneva Series of Commentaries, forms one of the most significant parts of the plan for a series of ‘popular commentaries’ on the New Testament. He projected to do this with J. A. Alexander in the 1850s. When the early death of Alexander prevented the completion of the series, the individual volumes were quickly prized in their own right and went through many editions on both sides of the Atlantic.

The qualities which have given Charles Hodge’s commentaries such a wide and enduring market are readily to be seen. In the first place they are singularly clear. The technicalities of critical opinion, which soon cause a volume to become dated, are not to be found in his pages. His aim was to produce commentaries which learned and unlearned alike could consult with profit. Believing that he was dealing with the words of the Holy Spirit he endeavoured to set out both what those words contain and the effects which their truth should have upon the conscience and life.

Charles Hodge (born Dec. 27, 1797, Philadelphia, Pa., U.S. died June 19, 1878, Princeton, N.J.) was the principal of Princeton Theological Seminary between 1851 and 1878. He is considered to be one of the greatest exponents and defenders of historical Calvinism in America during the 19th century.

Charles Hodge, one of the Old Princetonians and staunch Calvinists of the 19th century, delivers an exegesis of 1 & 2 Corinthians that is far from dry-as-dust commentary but is instead a lively study, easily accessible to the lay reader as well as the seminarian. Looking up 1 Corinthians 10:4, for example, I found his discourse on the "spiritual Rock" included common interpretations of this metaphor as well as his own close reading, all presented with brevity of word and depth of insight. His style of theological discourse continues to surpass many that are more contemporary.