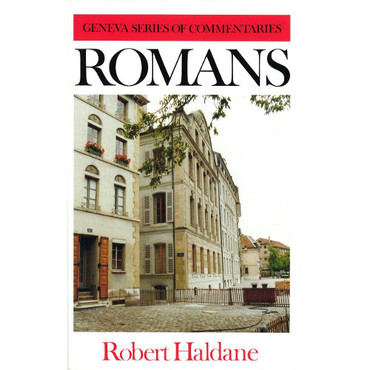 Robert Haldane’s Exposition of Romans, both in its contents and in the power of its influence, stands among the foremost of the many treatments of the epistle. As a commentary, Thomas Chalmers ‘strongly recommended’ it; Spurgeon put it in the front rank, and more recently, Martyn Lloyd-Jones owed ‘much profit and pleasure’ to it, characterising its contents as unsurpassed in ‘warmth of spirit’ and ‘practical application’.

Robert Haldane, a descendant of Scottish nobility, was born in London in 1764 and educated at Dundee and Edinburgh. After serving in the naval war against France (1780-1783) he returned to Edinburgh University and in 1786 settled down to a country life on his ancestral estate at Airthrey.

The outbreak of the French Revolution awoke his mind to serious things and led to his conversion. Thereafter Haldane devoted his wealth and talents to the spread of the gospel. He laboured to extend missionary work in India and Africa, and at home by building chapels, training students and publishing books he exerted a widespread influence.

Remarkable success accompanied his preaching tour on the continent in 1816-1819, particularly at Geneva and Montauban. On this tour many conversions resulted from his expositions of Romans and he published a commentary on this epistle in French. It was not until 1835-1839 that his great English work on Romans appeared in three volumes (published by the Trust from the 1874 edition in one volume). Into its composition had gone the energy and study of many years. This was his only commentary, though he wrote other valuable works such as Evidences and Authority of Divine Revelation and The Authenticity and Inspiration of the Scriptures.

After a life of great usefulness Haldane died in Edinburgh on 12 December, 1842, and was buried in Glasgow Cathedral. On his death bed he oft repeated the triumphant words: ‘For ever with the Lord – for ever – for ever.’