The Story of Eric Liddell (DVD) 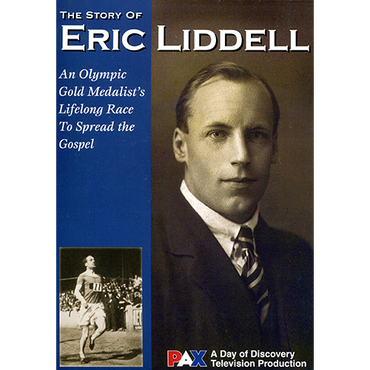 The Story of Eric Liddell (DVD)

You may remember the 1981 Academy award-winning “Best Picture” Chariots of Fire. This film told the story of a courageous Scottish runner who won gold in the 1924 Olympics. But there is far more to his inspiring story than the movie revealed. It was his fascinating life as a missionary that proved his spiritual mettle. This Olympic medalist from Scotland lived--and died--for the testimony of Jesus Christ. In this 3-part video with author and Day of Discovery host David McCasland, you'll trace Eric's life from the 1924 Olympics to his years in war-torn China. You'll hear testimonies from historians, friends, and family about his life as a boy, an athlete, a missionary, and a Bible teacher. But most of all, you'll learn about a man sold out for God. This special DVD presentation traces Eric Liddell’s life from his boyhood and rise to athletic fame through his years of missionary service in China. You’ll hear from his friends, colleagues, and family members as they bring to life the story of this man of deep conviction who lived out his commitment to God even during his final days in a Japanese internment camp during World War II. Bonus Feature: Eric Liddell's daughters, Patricia, Heather, and Maureen, return to China to visit the places where their father lived and died. Closed Captioning for the hearing impaired. Runtime: 78 minutes plus 30-minutes of bonus features

I enjoyed this movie. The action was a bit slow so my 9yo boy lost interest, but my 12yo daughter stayed with it (with a few complaints). We watched the movie Chariots of Fire before it and, of course, Hollywood changed things rather drastically. While Chariots is still a good movie, it lost the real character of Liddell. I found him much more inspiring after watching this movie.
I think it would be great in a church library and highschool youth leaders should use it for a movie night.