Upon This Slippery Rock by Eric D. Svendsen (Paperback) 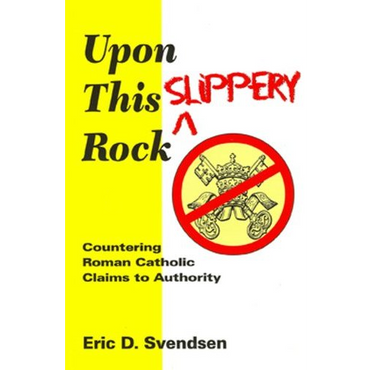 Upon This Slippery Rock by Eric D. Svendsen (Paperback)

There's a new breed of apologists on the Internet. They're very aggressive. They have very sophisticated web sites armed with what they believe to be the absolute truth. They're taking advantage of all the new media to get their message across—and they're out to undermine your Evangelical faith ... for they are CATHOLIC! That's right, these new apologists are Catholic, and they are trying to bring those who were once Catholic—but are now Born Again—and other true believers back to Rome! Let scholar Eric D. Svendsen help you defend your Bible-based faith, and show you how this aggressive false teaching with its false claims to authority can be dismantled by the clear teaching of Scripture—and simple logic! This is one of the most important Christian books you will ever read!

"There's a new breed of apologists on the internet. They're very aggressive. They are out to undermine your evangelical faith... for they are Catholic." So reads the blurb on the back of this short (76 pages) book.
It is written in a really easy to read style, with scenarios that the author has found himself in and having to deal with. He deals with various questions specifically relating to Rome's claims to authority. He does so with logic rather than with facts, showing for example that the RC position that it is wrong to make our own private interpretation about spiritual matters and that we should instead to listen to the authority of Rome, requires a person to use their own personal and private judgement, which is the very thing they are not meant to do.
It is this sort of argument that he goes in for, highlighting the logical problems with a number of these arguments. He also deals with the frequently quoted statistic that there are 25,000 Protestant denominations, and shows how wrong and misleading that figure is.
It is a useful book to have read if you find yourself in conversation with Catholics who are dogmatic about the authority of Rome.