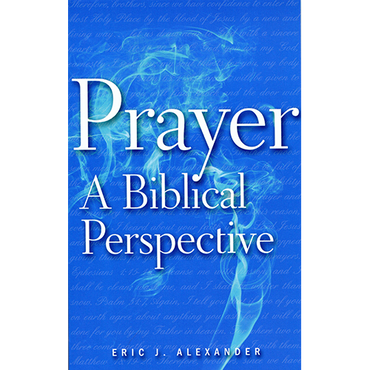 These words of J. C. Ryle are as true today as they were when they were first written over 150 years ago. Prayer matters, and Eric Alexander’s chief concern in this book is to remind Christians that prayer is fundamental, and not supplemental, both in the individual and in the corporate lives of God’s people. He shows that nowhere is this dependence on prayer more fully exemplified than in the life and teaching of Jesus himself, and in the ministry of the New Testament church.

Church leaders will find these studies a great spur to pray for the spiritual growth of their people, and church members will see afresh the urgent need to pray for their leaders.

For those who find it difficult to pray there is much encouragement here, as the author also addresses the common problems believers face when coming to pray. In short this is a book for all those who want to live nearer to God and to be refreshed in their communion with him.

Eric J. Alexander has been a minister of the Church of Scotland for over fifty years and has served churches in Glasgow, the city of his birth, and in Newmilns, Ayrshire. Throughout his ministry he has preached at conferences in the United Kingdom and overseas, and is a Council Member of the Alliance of Confessing Evangelicals. He is married to Greta and they have a daughter and a son. In 2010 the Trust published his book, Our Great God and Saviour.

Eric Alexander is a wonderful preacher who I was blessed to see at a few theology conferences in the past. His chief concern in this short book is to remind Christians that prayer is fundamental, and not supplemental, both in the individual and in the corporate lives of God’s people. This book has the feel of individual sermons that were delivered on prayer put into book form.

Alexander writes that because prayer defies definition, the Bible doesn’t give us a comprehensive definition of prayer. Because the reader would like a definition however, he uses the words of John Calvin, who in his commentary on Isaiah says, ‘Prayer is nothing else than the opening up of our heart before God’.

Alexander shares the following elements of true prayer from the scriptures:
1. Entering into God’s presence through the access obtained for us in Christ’s sacrificial death
2. Worshipping and adoring God for all that he is.
3. Praising and thanking God for all that he does.
4. Humbling ourselves before God because of what we are, and confessing our sin and failure.
5. Supplicating at God’s throne and petitioning him for the good things for which we are totally dependent on him.
6. Intercession for others.

In this book, Alexander looks at a number of examples of prayer in scripture, such as:
• Jesus teaching the disciples about prayer. (Matthew 6). Alexander writes that despite us calling this the “Lord’s Prayer”, this is not a prayer that Jesus ever prayed, or indeed could pray. The prayer is not intended to be repeated verbatim by us. It is rather a pattern for prayer, to teach us to pray ourselves.
• Sermon on the Mount (Matthew 7:7-12). Alexander writes “Many students of the Sermon on the Mount have wondered whether we are intended to see a distinction between these three precepts—ask, seek, knock—or whether we should think of them as just a repetition of the same idea. Personally, I do not think they are a mere repetition. More likely they seem to be an intensification with a different focus”.
• The priority of the Apostles (Acts 6:3-4). Alexander writes that if we are going to be apostolic in the pattern of our church life, we need to adopt the same priorities they had, devoting themselves to prayer and the ministry of the word. Alexander writes that “It is my deepest conviction that God is calling his church in the twenty-first century to re-echo this holy determination of the first century apostles.”
• The prayer life of Paul. Alexander states that the two dominant features of Paul’s ministry were prayer and preaching. He would put them in that order because of the apostolic priorities in Acts 6:4.
• The prayer of a penitent Sinner (Psalm 51). This psalm touches upon mercy, cleansing, sin, forgiveness and restoration.
• Thirsting for God (Psalm 63). There are several psalms which express in similar terms the psalmist’s thirst for God. Alexander writes that the ultimate reason for prayerlessness is a lack of desire for God.
• The Intercessory Ministry of the Holy Spirit. Alexander writes that perhaps the most convincing evidence of how deeply God desires that we should learn to pray, is that all three persons of the Godhead—Father, Son and Holy Spirit—combine together to persuade us to take up the ministry of prayer.
• Corporate Prayer. Prayer is the duty of the church corporately, not just of Christians individually. Alexander sees it highly significant that today one of the chief marks of the church’s malaise is the poverty of prayer meetings in the evangelical churches of the western world.

Alexander then looks at difficulties related to prayer, breaking them down into the categories of common, spiritual and practical difficulties.

Although short, this is an excellent book on prayer and highly recommended.