The Preaching of Jonathan Edwards by John Carrick (Hardcover) 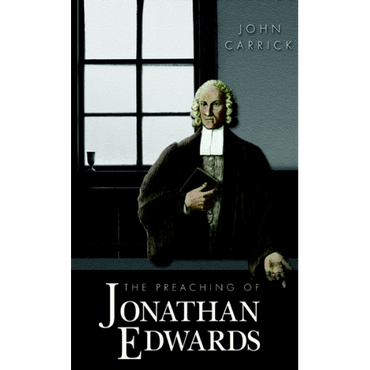 The Preaching of Jonathan Edwards by John Carrick (Hardcover)

Jonathan Edwards is widely regarded not only as America’s greatest theologian and philosopher, but also as one of her greatest preachers. It is a remarkable fact, however, that his preaching has been somewhat neglected, both in academic circles and in the Reformed churches. Published in the year that marks the two hundred and fiftieth anniversary of his death, this book successfully straddles the church’s and the academy’s interest in Edwards and supplies that omission.

Dr. Carrick demonstrates that Edwards was preaching and writing at a unique moment in history when the Puritan spirit and the spirit of the Enlightenment intersected; he traces the remarkable fall and rise of interest in the great American preacher-theologian in the nineteenth and twentieth centuries; he interacts, both positively and critically, with the now complete Yale edition of Edward’s Works and also with the ever-burgeoning field of Edwards scholarship; and he cites extensively from Edward’s sermons, treatises, and Miscellanies in order to demonstrate the power and the profundity of his preaching and thought.

The author’s main focus is, throughout, primarily homiletical; but interwoven in the homiletical focus are theological, philosophical, historical, and biographical strands. He constantly seeks to place Edwards and his sermons in their New England context-indeed, in their wider eighteenth century transatlantic context-thus providing, wherever possible, the historical background for Edwards’ sermons.

The ‘New York period’, the ‘Great Apostasy’ at Yale, the Bolton interlude, the Yale tutorship, the Boston Lecture of 1731, the Enfield sermon, the Yale Commencement of 1741, the great revivals, the landmark funerals, the Edwards-Stoddard-Williams dynamic, the Communion controversy, the Farewell Sermon, the romance of the Stockbridge years-these are all treated within the context of a systematic analysis of Edward’s preaching under a number of different themes.

Dr. Carrick does not shrink from sounding a note of critique at certain points and he warns against the danger of slavishly imitating the New England preacher. But he is also clearly convinced of Edwards’ extraordinary greatness and of the tremendous value of his sermons for Christians today. ‘Iron sharpens iron’; and the iron of Edward’s marvellous expositions and applications is sure to sharpen the minds and souls of all those who study them carefully.

This is a very important book on one of America's most important pastor-theologians. In the realm of Edwards studies, relatively little attention has been given to the theology and rhetoric of his preaching. Carrick's work is significant, not only for its historical interest, but because it dissects Edwards' preaching in a manner that sets him forth as a pattern of powerful rhetoric for contemporary preachers. In particular, Jonathan Edwards is an excellent model for blending together strong exposition, sound doctrine, and piercing application. This healthy mixture is conspicuous by its virtual absence in most modern preaching, making Carrick's work not simply a useful read, but a necessary one in our day and age.
This large book is divided into twenty-eight chapters, which treat virtually every feature of Edwards' sermons, including introductions, doctrine, application, illustrations, conclusions, and much more. The chapters on "God-Centeredness" (ch. 2), "Introductions" (ch. 8), "Different Categories of Hearers" (ch. 16), and "The Spirit of God" (ch. 27) are particularly helpful. The last mentioned of these reveals the heart of Carrick's treatment of Edward's preaching. We must not simply view Edward's sermons from a literary standpoint, but from a homiletical and spiritual standpoint (444). As much as we have to learn from Edwards' rhetoric and style of preaching, the greatest lesson that we have to learn from him is dependence upon and confidence in the power of the Third Person in the Trinity in our preaching. This leaves readers with a carefully maintained balance between developing effective rhetorical methods in preaching, while simultaneously placing all hope and dependence upon the Spirit of God rather than upon those methods.
Edwards' use of application in his sermons is both gripping in its force and astonishing in its breadth and depth. One of the primary needs in modern preaching is to recover powerful and searching application that is deeply rooted in a thorough exposition of Scripture and a precise and clear understanding of theology. Edwards is perhaps one of the most preeminent examples of effective sermon application in the history of Christianity. This reason alone makes this book one that ministers cannot afford to pass by.
An interesting feature of this work is the manner in which the author has interwoven the historical context of Edwards' life with his treatment of Edwards's sermons. The result is that instead of reading as a bare list of citations and observations, the book presents a gripping narrative as well. It abounds with primary source evidence, much of which has been gleaned from the recently completed Yale edition of Edward's Works. The interaction with secondary literature is thorough as well, though it would have been useful to situate Edwards' preaching in the historic context of Reformed Orthodoxy in general. There is little to no emphasis or comparison of Edwards to contemporary or previous Reformed preaching. Although Edwards' lived during the transition between the era of Reformed Orthodoxy into the Enlightenment, several aspects of his preaching, such as "Confutation" (ch. 18) and "Objections and Answers" (ch. 22), have historical roots and precedents in Medieval Scholasticism as well as in subsequent so-called Protestant Scholasticism. That being said, the influence of theological methodology on Reformed Orthodox preaching is a topic that has been generally neglected.
The primary drawback to this book is the absence of subdivisions. In closely printed chapters that often reach twenty-pages, lacking divisions in the text can make reading cumbersome. The material is well organized and easy to follow, but clearly marked divisions in thought or argument help most readers read more effectively and retain a sense of progression and interest in the book.
Ministers who avail themselves of Carrick's labor of love on The Preaching of Jonathan Edwards will do good service both to themselves and to their congregations. The author both loves his subject and exemplifies the principles gleaned from it in his own preaching. May the Lord use this book to help produce a generation of wise and Spirit-filled preachers!