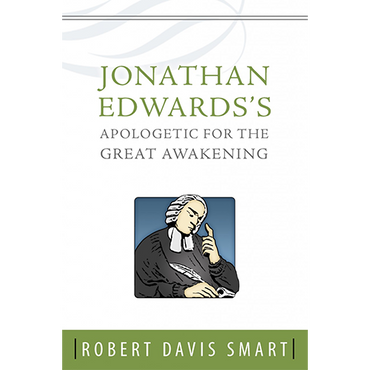 In the 1740s Jonathan Edwards emerged as the New Light proponent of the claim that the Great Awakening was, in the main, a true work of the Spirit of God. Conversely, Charles Chauncy led the Old Lights in opposition by offering criticisms of the Awakening.

In this book, Robert Davis Smart examines Edwards’s defense of the revival with particular attention to Chauncy’s criticisms, which have often been acknowledged but not previously subjected to thorough analysis. He sets forth historical and contextual factors that shaped Edwards and his generation, shows how Edwards emerged as a leader of the revival from its early days, and offers an updated survey of the modern attempts to interpret the Awakening theologically, sociologically, and historically.

Here is a detailed treatment of the contrasting perspectives of Edwards and Chauncy, an extensive analysis of their major works regarding the revival, an able assessment of the essential issues raised by the debate, and an evaluation of the significant contributions of these men.

Robert Davis Smart is senior minister of Christ Church in Bloomington, Illinois. He teaches part-time at different seminaries, preaches at conferences, and stays active in world missions. He and his wife, Karen, enjoy their five children and three grandchildren.

“This is a book about the debates that swirled around the heated question whether New England’s Great Awakening was a work of the Holy Spirit. As a work of reception history, it is unparalleled in scope and attention to detail. Employing tools from social science, social history, and theology, Smart explains the terms of debate, shows how Edwards and his critics disagreed with one another, and offers an even-handed assessment of the legacies of their conflict from the 1740s and 1750s to the present. I recommend this volume to anyone interested in the history of revivals in America—but especially to those with an interest in the pneumatological questions most important to Jonathan Edwards and his heirs.”  — Douglas A. Sweeney, Trinity Evangelical Divinity School

“Robert Davis Smart provides us with a thorough, impressive, and theologically informed account of one of the great debates in American history. His work will be the point of departure for future discussions of the topic.” — George Marsden, University of Notre Dame

“Church history is replete with famous and not-so-famous clashes of differing visions of the Christian life: Valentinus and Irenaeus, Pelagius and Augustine, Erasmus and Luther—and Chauncy and Edwards. In the case of the latter, while many Edwardsean studies reference it, none have studied it as exhaustively as this fresh study by Robert Smart. He ably documents the vital importance of the showdown between these two men on the American frontier for the maturing of Edwards’s pneumatology and piety. This is a necessary read for anyone interested in the Great Awakening or the shape that Evangelicalism took in the century after Edwards’s pen had ceased to write.” — Michael A. G. Haykin, The Southern Baptist Theological Seminary