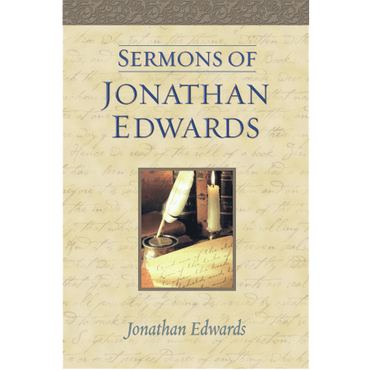 Jonathan Edwards (October 5, 1703 – March 22, 1758) was a preacher, theologian, and missionary to Native Americans. Edwards "is widely acknowledged to be America's most important and original philosophical theologian," and one of America's greatest intellectuals.

Jonathan Edwards is primarily remembered today as a gifted and influential theologian. But in eighteenth-century America, his preaching resounded from pulpits throughout New England, sparking the flame of revival that became the “Great Awakening.” As the fame of this Puritan pastor and preacher of revival spread far and wide, his sermons galvanized many of his listeners into reexamining their lives and faith. Ever alert to the dangers of the religiously complacent—those who only observed the surface requirements of religion—Edwards tirelessly proclaimed the overpowering majesty and grandeur of God, and humanity’s hopelessness for moral improvement short of his grace. This stirring selection of 20 messages allows readers to experience the words that swept through this young nation with a message of repentance and a call to action.

“The title is fully descriptive of the book. Here are represented some twenty sermons by Jonathan Edwards with only a minimum of critical apparatus - some six pages of introduction which only on the last unnumbered page do you discover are by Patricia Klein, who has done a good job within the limitation of so few pages. . . . Here are twenty sermons to read and be challenged by. The selection is fair, including some of his most famous pulpit presentations and several sermons that Edwards chose to preach on more than one occasion. It includes both his first sermon and that delivered to the Northampton Church after it had rejected him as their minister following some twenty-three years of service.” — Expository Times