The Imperative of Preaching by John Carrick 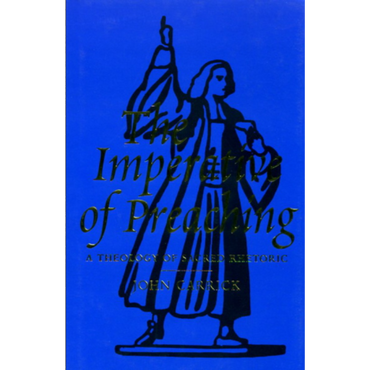 The Imperative of Preaching by John Carrick

In this necessary and vital book John Carrick has taken the task of first, defining the four categories in the theology of the rhetoric of preaching the indicative, exclamative, interrogative and the imperative. Secondly, he provides ample illustration of the four categories from Scripture. Thirdly, he illustrates and exemplifies each of these categories from the sermons of Jonathan Edwards, George Whitefield, Samuel Davies, Asahel Nettleton, and Martyn Lloyd-Jones. Finally, John Carrick considers the significance of the indicative-imperative structure of New Testament Christianity in relation to redemptive-historical preaching. This must be read.

I read John Carrick's The Imperative of Preaching some years ago. Years before I ever preached from a pulpit. I highly recommend it. Carrick states explicitly his main thesis:

"The central thesis of this book is that the essential pattern or structure which God himself has utilized in the proclamation of New Testament Christianity is that of the indicative-imperative. In other words, God himself has, in the gospel of Christ, harnessed these two fundamental grammatical moods and invested them with theological and homiletical significance." p.5

Carrick argues that our pattern for preaching should at least loosely follow the pattern of the Gospels and Epistles. That is, as the NT writers state What God has done type statements followed by What God requires of us type statements, so must we. Paul's letters to the Romans and Ephesians are perfect examples. There are almost no commands (imperatives) in Romans, until 11 chapters of truth statements (indicatives) are first laid out. Ephesians is similar. About three glorious chapters of What God has done in the Gospel followed by chapters 4 through 6 stating what God requires of us in the specific circumstances of life. The imperatives are always linked back to the indicatives with words like "...therefore..." and "...so...". And this is key: We do not issue commands to people, without always reminding them that God commands us to act a certain way always based of what He has first done.

I highly recommend this book as a help to read the New Testament epistles well. Carrick pointed out some great connections that I had not seen before. I also highly recommend this book to what probably was Carrick's target audience: preachers. We must know clearly the indicatives of Scripture. We must know (obviously) the imperatives of Scripture. But even more important than this is knowing how one flows into another and how all of God's commands flow not from a cold-hearted being who only desires to give us "busy-work" but from a gracious God that has done beyond all that we could ever ask or imagine and now rightly calls us to live a certain way in light of His work in the Gospel of His Son, Jesus Christ.