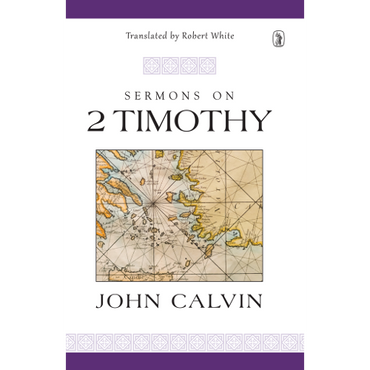 Preaching is the lifeblood of the Christian church. In every age God has used the proclamation of his word to bring men and women to repentance and faith in Christ, and to help them grow in grace.

Throughout his long ministry in Geneva (1536–38, 1541–64), Calvin was a tireless preacher. He spoke of course to a specific congregation and at a particular point in time. Even so his sermons have travelled well across both time and space. God’s word is not bound by history or geography, and Calvin’s French has a robust plainness and directness which allows it to cross barriers of language and culture with relative ease.

Of the 101 sermons which the Reformer preached in 1554–55 on the Pastoral Letters, thirty, on Paul’s second letter to Timothy, are presented here. They have been newly translated from the original French. They offer a clear, forthright exposition of the biblical text, but also challenge the reader to live out the truths taught, since to be profitable God’s word must transform the way we think, feel and act. In Calvin’s hands the sermon is an instrument of real and lasting change.

What the Pastoral Letters meant to Calvin may be seen from the unusually frank comment which he makes when introducing his sermon series on Second Timothy:

‘If we read this letter carefully, we will see that God’s Spirit there reveals himself with such power and majesty that we cannot avoid feeling thrilled. For my part, I know that this letter has done me as much good as any book of Scripture. Every day there is something of value in it. I do not doubt that those who closely study it will feel the same. If we want the kind of testimony to God’s truth which will pierce our hearts, we can do no better than tarry here.’

This French theologian and Genevan pastor is one of the most preeminent of all the 16th-century Christian reformers. After learning about Martin Luther’s teachings, Calvin passionately embraced Reformation beliefs, sharing his conversion story in his Commentary on the Psalms. Writing this book of Psalms commentary put Calvin at great risk, given that many of his fellow believers were being martyred at the stake for their beliefs. He was not daunted, however, and another of the John Calvin books is now known as Protestantism’s magnum opus: The Institutes of the Christian Religion. Additional books of note include A Guide to Christian Living, which offers clear direction to believers, and encouragement to everyone wanting to live according to the Gospel; and Truth for All Time, this book written to show French monarchs the beliefs of Protestants in the country.