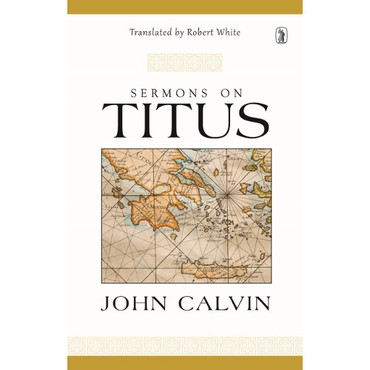 Calvin’s expository sermons to the great congregation of St Peter’s, Geneva, taken down in shorthand and then published across Europe, were among the most sought-after volumes of the sixteenth century. In the late 1570s, translated from the French, these bulky volumes flowed through London’s bookshops and none was more popular than the ‘One hundred Sermons on the Epistles of St Paul to Timothy and Titus’ which appeared for the first time in 1579. The public demand was understandable. First, Calvin ‘opened the Scriptures’, not in these volumes for students only, but for the whole church. Second, the sermons were preaching in the full New Testament sense of the term, that is, proclamation and persuasion, with power and conviction.

For the first time in more than 450 years, Calvin’s Sermons on Titus have been translated afresh into English. These sermons are not merely an updating of the language of Laurence Thomson’s 1579 English translation (which, along with Calvin’s Sermons on 1 and 2 Timothy, was previously reprinted in facsimile by the Trust in 1983). Robert White’s new translation goes back to Calvin’s original French, and the result is a fine modern English translation that will make the reader feel something of the excitement of those Elizabethan Christians who so prized their own contemporary English version of Calvin’s sermons on this pastoral epistle.

While the seventeen sermons in this volume were preached by Calvin between August and mid- October, 1555 during the course of his regular pulpit ministry in Geneva, they are far from being mere historical curiosities. Along with concern for irreproachable leadership, faithful teaching and the spiritual well-being of the church’s members, the apostle’s letter to Titus sounds a strongly ethical and evangelistic note in its emphasis on upright living, by which God is honoured and outsiders are drawn to the faith as they witness the power and grace of the gospel.

Accordingly, in these sermons Calvin consistently stresses the centrality of God’s revealed word in the collective life of the church, and the necessity for each believer to conform in holiness and uprightness to God’s standard of purity. A wholesome life is, through the Spirit’s gracious work, both the consequence and the accompaniment of wholesome teaching. Inconsistency of conduct is not, however, easy to avoid, and the world will rightly condemn Christians who say one thing and do another. Transformation into Christ’s likeness is the work of a lifetime. Enrolled in God’s school, believers are urged to profit each day, growing not only in knowledge but also in love, and not for their own sake only but for that of their neighbour, to whom they are bound by ties of humanity and brotherhood. In this way the church is strengthened, its witness is confirmed and tangible proof is given that it is what it claims to be the community of God’s redeemed on earth. The sermons on Titus reveal the heart of Calvin the pastor, the shepherd of God’s flock, whose members are nourished by the word of truth, made one with Christ by the Spirit’s regenerating power, adopted into God’s family and promised a heavenly inheritance which cannot fail.

Robert White formerly taught in the department of French Studies at the University of Sydney, Australia, and has a specialist interest in the Reformation in French-speaking areas of Europe. He is the translator of Calvin’s Sermons on the Beatitudes, Songs of the Nativity, Faith Unfeigned, A Guide to Christian Living, and The Institutes of the Christian Religion (1541 edition), which are also published by the Trust.

John Calvin (1509-1564) was a theological giant of the Protestant Reformation. A contemporary of Martin Luther, he had as much influence over this period of history as his German counterpart. In 1536 he published his famous Institutes of the Christian Religion, which was a systematic presentation of the Protestant position. His writings are still cherished and relevant today.