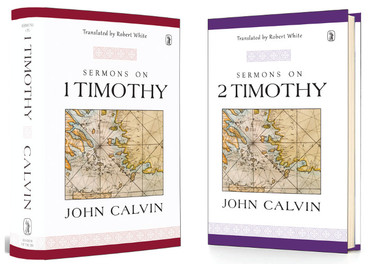 Calvin’s expository sermons to the great congregation of St Peter’s, Geneva, taken down in shorthand and then published across Europe, were among the most sought-after volumes of the sixteenth century. In the late 1570s, translated from the French, these bulky volumes flowed through London’s bookshops and none was more popular than the ‘One hundred Sermons on the Epistles of St Paul to Timothy and Titus’ which appeared for the first time in 1579. The public demand was understandable. First, Calvin ‘opened the Scriptures’, not in these volumes for students only, but for the whole church. Second, the sermons were preaching in the full New Testament sense of the term, that is, proclamation and persuasion, with power and conviction.

These sermons are newly translated from the French of 1561 by Robert White.

Robert White formerly taught in the department of French Studies at the University of Sydney, Australia, and has a specialist interest in the Reformation in French-speaking areas of Europe. He is the translator of Calvin’s Sermons on the Beatitudes, Songs of the Nativity, Faith Unfeigned, A Guide to Christian Living, and The Institutes of the Christian Religion (1541 edition), which are also published by the Trust.

Preaching is the lifeblood of the Christian church. In every age God has used the proclamation of his word to bring men and women to repentance and faith in Christ, and to help them grow in grace.

Throughout his long ministry in Geneva (1536–38, 1541–64), Calvin was a tireless preacher. He spoke of course to a specific congregation and at a particular point in time. Even so his sermons have travelled well across both time and space. God’s word is not bound by history or geography, and Calvin’s French has a robust plainness and directness which allows it to cross barriers of language and culture with relative ease.

Of the 101 sermons which the Reformer preached in 1554–55 on the Pastoral Letters, thirty, on Paul’s second letter to Timothy, are presented here. They have been newly translated from the original French. They offer a clear, forthright exposition of the biblical text, but also challenge the reader to live out the truths taught, since to be profitable God’s word must transform the way we think, feel and act. In Calvin’s hands the sermon is an instrument of real and lasting change.

What the Pastoral Letters meant to Calvin may be seen from the unusually frank comment which he makes when introducing his sermon series on Second Timothy:

‘If we read this letter carefully, we will see that God’s Spirit there reveals himself with such power and majesty that we cannot avoid feeling thrilled. For my part, I know that this letter has done me as much good as any book of Scripture. Every day there is something of value in it. I do not doubt that those who closely study it will feel the same. If we want the kind of testimony to God’s truth which will pierce our hearts, we can do no better than tarry here.’