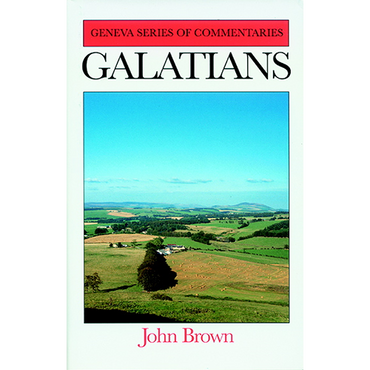 The expositions of John Brown (1784-1858) are unusually helpful to all kinds of readers. Spurgeon said in his Commenting and Commentaries, ‘Brown is a modern Puritan of the utmost value.’ The volume on Galatians is one of the scarcest books in the market.’ As a theological professor, Brown was strongly convinced that his students’ view should be ‘not only consistent with, but derived from a careful exegesis of the ‘words which the Holy Ghost teacheth’…it has been my sincere desire to bring out of the inspired words what is really in them, and to put nothing into them that is not really there.’  But as the pastor of a congregation, Brown was also anxious that his expositions should edify all Christians and not only instruct students. As a result his commentaries are unusually helpful to all kinds of readers.

Though in his last twenty years John Brown of Haddington (as he is best described) became the Divinity Professor of his denomination training students during the summer months together with his ministerial work and though his learning was such that he mastered nearly a dozen languages, yet he remained to the last singularly devoted to one aim, the exposition and preaching of the Word of God. He preached, men said, as though he had read no other book. There is no doubt that it was partly due to the fact that John Brown (1784-1858) was the grandson of such a man that he became one of the greatest Scottish exegetes of the nineteenth century.