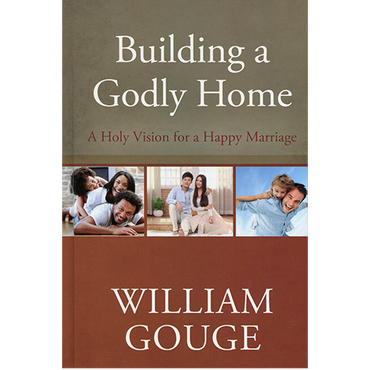 For years, William Gouge’s Domestical Duties has stood as the foremost Puritan treatment of Christian family life. Yet due to its size and antiquated expression, it has become almost unknown among current generations of believers. To help revive the usefulness of this classic book, Scott Brown and Joel R. Beeke divided Gouge’s work into three manageable volumes, updated the language to modern standards, and have given it the title Building a Godly Home.

In the second volume, A Holy Vision for a Happy Marriage, we find detailed counsel about the most important relationship in the family—husband and wife. Gouge carefully addresses what a fit marriage is and the proper way to enter into one. He then discusses the mutual duties married couples share in order for marriage to survive and thrive, as well as the duties specific to men and women respectively. Not only does he give detailed treatment of how these responsibilities are best expressed and too often hindered, but he also provides ample biblical motivation to set us on the right course. Christian husbands and wives will find much encouragement in this book.

Gouge’s second volume addresses our duties in marriage from a biblical perspective: mutual duties, the husband’s particular duties, and the wife’s particular duties. His third volume lays out the biblical duties of parents toward their children and children toward their parents. All three volumes show us that when the Word is the rule of our duty, duty becomes delight, so that we can truly enjoy family life in the fear of God.

William Gouge (1575–1653) was a Puritan minster who served for forty-five years at St. Ann Blackfriars in London and was a member of the Westminster Assembly. He and his wife, Elizabeth, had thirteen children.

“Few issues spell countercultural Christianity as does a biblical view of the home and its various relationships and responsibilities. Those like the seventeenth-century Presbyterian William Gouge, who provided a lengthy exposition of domestic life as outlined in Scripture, got themselves into trouble with those who viewed biblical teaching burdensome (Gouge was vilified by wealthy city women, for example). But domestic reform is essential if we are to reflect godliness in the home, and Gouge’s once enormously popular Of Domestical Duties is without equal in describing what it looks like.  A masterful guide, Gouge is pastoral, clear-headed, thoughtful, and eminently Bible-focused as he writes about the tasks, ideals, and problems of Christian family life. Once as popular as Bunyan’s Pilgrim’s Progress and Matthew Henry’s Commentary, Gouge’s Of Domestical Duties deserves a central place in the modern Christian home.” — Derek W.  H. Thomas, Senior Minister, First Presbyterian Church, Columbia, South Carolina