The Wiles of Satan by William Spurstowe (Hardcover) 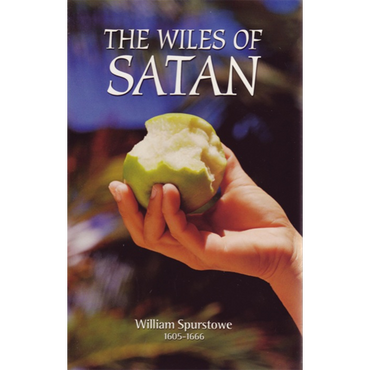 The Wiles of Satan by William Spurstowe (Hardcover)

The Bible says that Satan is crafty and subtle, and it warms us to be wary of his "wiles." In order to be ready for this adversary, we must be knowledgeable of his methods and tactics. In this extremely rare Puritan reprint, William Spurstowe tells us of the great ability of Satan to tempt us, enumerates his wiles, and then provides antidotes against his deceptions. An enemy as powerful and as potentially harmful as this one requires all the preparation we can make.

William Spurstowe (1605-1666) was educated at Emmanuel College, Cambridge. He received his B.A. in 1627 and his M.A. in 1630. His first pastorate was at Great Hampden in Buckinghamshire, where he was installed in 1638. In 1643 Spurstowe was chosen to attend the Westminster Assembly as a presbyterian member. From 1658-1660, Spurstowe, along with Edward Reynolds, Edmund Calamy, Simeon Ashe, Thomas Manton, Thomas Case, and others, served the parliament of Richard Cromwell. Spurstowe was one of the ejected ministers of 1662. He died soon after the great plague of London, in 1666.