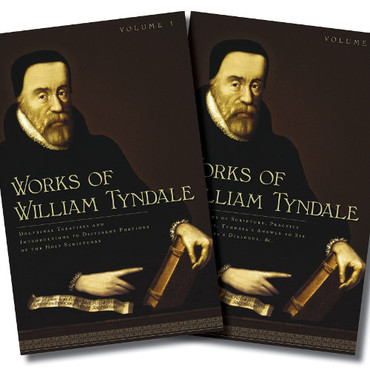 William Tyndale is justly best remembered as a Bible translator. During the last eleven years of his short life he published three editions of the complete New Testament, the Pentateuch, the book of Jonah, and a few other parts of the Old Testament. He may well have left behind him in manuscript form a translation of the Old Testament's historical books from Joshua to 2 Chronicles, which was published as part of 'Matthew's Bible' in the year following his martyrdom. In the last letter from his pen, we see him zealous to make progress with the translation of the Old Testament, as languishing in his final imprisonment he requests that his 'Hebrew Bible, Hebrew grammar, and Hebrew dictionary' be granted to him. There is little doubt that Tyndale could have translated the whole of the Bible into English if he had given himself exclusively to that work. But alongside the work of translation he felt it was necessary to contend earnestly for the Reformed faith and so he threw himself into several of the key theological controversies of the times. For this 'Apostle of England' the Bible must not only be translated, its teachings also must be expounded and applied in a practical way. To such work of exposition and application Tyndale gave himself with a passion, and in so doing not only proved himself a master of true biblical interpretation, but has left to posterity works of lasting value. As F.F. Bruce wrote in another context: "A reprint of this kind is no mere archaeological curiosity; one who was so intensely a man of the Bible as Tyndale was speaks to more ages than his own, and in the following pages we shall find that he has much to say to us, if we pay heed to what we read."

William Tyndale (c. 1492 1536) was born at some time in the period 1484 1496 (Wikipedia; Loane gives 1490-95), possibly in one of the villages of Gloucestershire. He was educated at Magdalen Hall (later Hertford College), Oxford University (BA, 1512; MA, 1515) and attended Cambridge between 1517 and 1521. He was a gifted linguist, over the years becoming fluent in French, Greek, Hebrew, German, Italian, Latin, and Spanish, in addition to his native English.
Endorsement
High quality edition of the original Parker Society printing. This is a must have edition for students of the Reformation. Tyndale was the greatest of the reformers and the most lucid commentator and learned translator of his day.