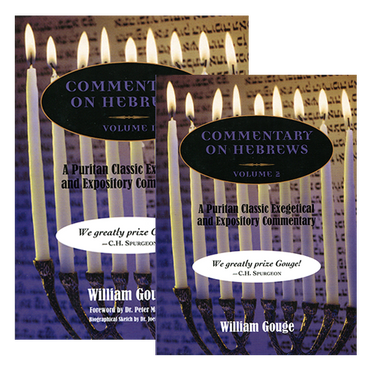 William Gouge (1575-1653) was born in Stratford-Bow Middlesex County, England. He was Educated in Paul's School, London, Felstad in Essex, and at Eton School and graduated from King's College, Cambridge, followed by a brilliant teaching career there. Following his ordination at 32 years of age, he ministered at Blackfriars Church, London for 45 years. In addition to his great success as a pastor, his mid-week expository lectures at Blackfriars drew increasingly larger crowds. Spirituality and scholarship made his career at Cambridge, his pastoral work and his writings unique. He was renowned as "the father of the London Divines and the oracle of his time." In 1643 he was made a member of the Westminster Assembly of Divines by vote of Parliament. His primary works include his Commentary on Hebrews, The Whole Armour of God, and Domestic Duties. "We greatly prize Gouge. Upon any topic which he touches he gives outlines which may supply sermons for months." -C.H. Spurgeon "There can be no doubt whatsoever that the crowning commentary on the Epistle to the Hebrews, as far as preachers are concerned, is the great classic, 'Gouge on the Epistle to the Hebrews,' from the pen of Dr. William Gouge. The exegetical value of this commentary is enormous: every vital word in Hebrews is explained in a manner far superior to that which suffices for modern word studies. The expository value of the commentary is equally rich: every doctrine, theme and argument which is found in the Epistle being given its own heading and section. May the Lord greatly bless this magnificent help to many preachers of the Word in these needy times." - Dr. Peter Masters "We are so grateful to Solid Ground Christian Books for reprinting Gouge's magnum opus, A Commentary on the Epistle to the Hebrews. This massive book, originally published in three volumes, contains the notes of more than a thousand sermons given over a thirty year period at Blackfriars. The first volume was published in 1655; Gouge was still working on the last half of the last chapter of Hebrews when he died. His son, Thomas, completed it, using his fatherÆs notes. It is a golden exposition of the fullness of Christ." - Dr. Joel Beeke This is an unabridged reprint taken from the 1866 edition. It will be in two large Hardcover or Paperback volumes. Volume One covers Hebrews 1-7, and Volume Two covers Hebrews 8-13. Over 1120 pages of Puritan exposition and application, with a 20 page topical index added.