The Works of William Perkins (Volume 6) 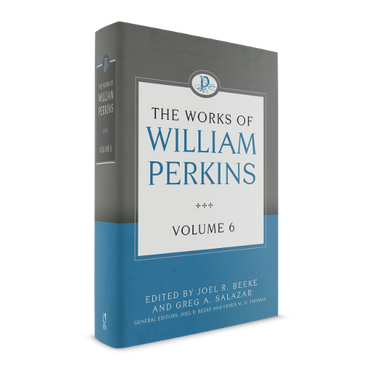 The Works of William Perkins (Volume 6)

The Works of William Perkins fills a major gap in Reformed and Puritan theology. Though Perkins is best known today for his writings on predestination, he also wrote prolifically on many subjects. His works filled over two thousand large pages of small print in three folio volumes and were reprinted several times in the decades after his death. His complete works, however, have not been in print since the mid-seventeenth century. This modern typeset edition of the Works includes four volumes of Perkins’s expositions of Scripture, three volumes of his doctrinal and polemical treatises, and three volumes of his practical writings.

WILLIAM PERKINS (1558–1602) earned a bachelor’s degree in 1581 and a master’s degree in 1584 from Christ’s College in Cambridge. During those student years he joined up with Laurence Chaderton, who became his personal tutor and lifelong friend. Perkins and Chaderton met with Richard Greenham, Richard Rogers, and others in a spiritual brotherhood at Cambridge that espoused Puritan convictions.

From 1584 until his death, Perkins served as lecturer, or preacher, at Great St. Andrew’s Church, Cambridge, a most influential pulpit across the street from Christ’s College. He also served as a teaching fellow at Christ’s College, catechized students at Corpus Christi College on Thursday afternoons, and worked as a spiritual counselor on Sunday afternoons. In these roles Perkins influenced a generation of young students, including Richard Sibbes, John Cotton, John Preston, and William Ames. Thomas Goodwin wrote that when he entered Cambridge, six of his instructors who had sat under Perkins were still passing on his teaching. Ten years after Perkins’s death,

Cambridge was still “filled with the discourse of the power of Mr. William Perkins’ ministry,” Goodwin said.

GREG A. SALAZAR is assistant professor of historical theology for the PhD program at Puritan Reformed Theological Seminary in Grand Rapids, Michigan.

JOEL R. BEEKE is president of Puritan Reformed Theological Seminary and a pastor of the Heritage Reformed Congregation in Grand Rapids, Michigan.

“On the broad shoulders of William Perkins, epoch-making pioneer, stood the entire school of seventeenth-century Puritan pastors and divines, yet the Puritan reprint industry has steadily bypassed him. Now, however, he begins to reappear, admirably edited, and at last this yawning gap is being filled. Profound thanks to the publisher and heartfelt praise to God have become due.”

“Without a doubt, the Puritans were theological titans. The Puritan theological tradition did not emerge out of a vacuum. It was shaped by leaders and theologians who set the trajectory of the movement and shaped its commitments. William Perkins was one of those men. Perkins’s contribution to Puritan theology is inestimable, and this new reprint of his collected works is a much-awaited addition to all who are still shaped and influenced by the Puritans and their commitment to the centrality of the grace of God found only in Jesus Christ. Even now, every true gospel minister stands in debt to Perkins, and in his shadow.”

“The list of those influenced by the ministry of William Perkins reads like a veritable Who's Who of the Puritan Brotherhood and far beyond. This reprinting of his works, so long unobtainable except by a few, is therefore a publishing event of the first magnitude.”

“The father of Elizabethan Puritanism, Perkins presided over a dynasty of faith. The scope of his work is wide, yet on every topic he treats one discovers erudition and deep reflection. He was the first in an amazing line of ministers at Cambridge University’s main church. A pastor to pastors, he wrote a bestseller on counseling, was a formative figure in the development of Reformed orthodoxy, and a judicious reformer within the Church of England. I am delighted to see Perkins’s works made available again for a wide audience.”

“William Perkins was a most remarkable Christian. In his relatively short life he was a great preacher, pastor, and theologian. His prolific writings were foundational to the whole English Puritan enterprise and a profound influence beyond his own time and borders. His works have become rare, and their republication must be a source of real joy and blessing to all serious Christians. Perkins is the first Puritan we should read.”