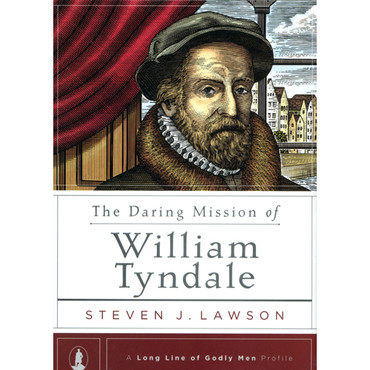 Early in the sixteenth century, legislative decree in England controlled people’s access to Scripture and prohibited an English Bible. But theologian and linguist, William Tyndale, was determined to provide his fellow countrymen with Scripture they could read.

In The Daring Mission of William Tyndale, the latest addition to the Long Line of Godly Men series, Dr. Steven J. Lawson traces this daring mission, which was ultimately used by God to ignite the English Reformation and would cost Tyndale his life. From one man’s labor, we’re reminded of God’s faithfulness to preserve His Word and equip His people.

Steven J. Lawson is founder and president of OnePassion Ministries, a ministry designed to bring about biblical reformation in the church today, and former senior pastor of Christ Fellowship Baptist Church in Mobile, Ala.

“Few people reading the Bible in English today understand the debt they owe to the martyr William Tyndale. Even among those who know the name of the fountainhead of modern English Bible translation, few realize that Tyndale fervently stood for the doctrines of justification by faith alone and salvation by grace alone. This little gem of a book reveals Tyndale’s labors for the truth, his sufferings for the truth, and his love for the truth. May God use Steven Lawson’s book to cause such love to burn in many others.” — Dr. Joel R. Beeke, President, Puritan Reformed Theological Seminary

“Much more than a biography, this thrilling chronicle quickens the Christian heart and stokes the fires of resolve to coura- geously defend and proclaim the truth. Dr. Lawson’s diligent work on William Tyndale should be considered essential reading for every English-speaking believer, as it carefully unfolds the forgotten legacy of God’s faithfulness in using one man, against all odds, to bring us the gospel in the English language.” — David Parsons, Founder, Truth Remains

“In the history of the Christian faith among English-speaking peoples, it was William Tyndale’s translation of the Bible that made of them a people of the Book. His life was poured out even to the point of death to achieve this goal, and every generation of believers needs to hear the story of his life and death afresh. And one of the best guides to his story and its lessons for our day is this new study by Steve Lawson. Highly recommended!” — Michael A.G. Haykin, Professor of Church History and Biblical Spirituality, The Southern Baptist Theological Seminary