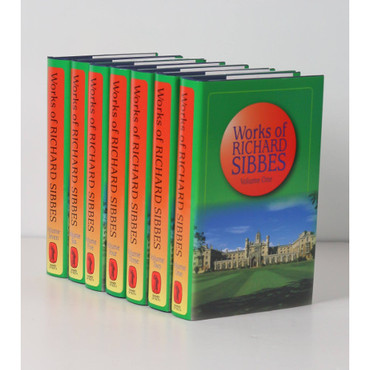 Richard Sibbes was born at Tostock, Suffolk, in 1577 and went to school in Bury St Edmunds. He was converted around 1602-3 through the powerful ministry of Paul Bayne, the successor of William Perkins in the pulpit of Great St Andrew's Church. After earning his B.D. in 1610, Sibbes was appointed a lecturer at Holy Trinity Church, Cambridge.

More than anything else, Richard Sibbes was a great preacher. He never lost sight of the fact that the best Christian counselling is done through the patient and enlivening exposition of the Word of God. Sibbes excelled as a comforter of the troubled and doubting, but he also possessed the rare gift of illuminating every passage of Scripture he handled by drawing out its significance for his hearers and readers. The republication of the Nichol edition of his complete works is a notable event for all who have an appetite for helpful and faithful biblical preaching.

Memoir of Sibbes by A B, Grosart

The Bruised Reed and Smoking Flax

The Sword of the Wicked

The Saint’s Safety in Evil Times and other sermons, including a series on 1 Peter 4

Bowels Opened (Sermons on the Song of Solomon 4-6)

The Spouse’s Earnest Desire after Christ

A Breathing after God The Returning Backslider

The Glorious Feast of the Gospel

An Exposition of 2 Corinthians 1

A Glance of Heaven

The Excellency of the Gospel above the Law and other sermons, all on texts from 1 & 2 Corinthians

Expositions of texts and portions of the other Epistles of Paul, including Christ’s Exaltation Purchased by Humiliation

The Rich Poverty or The Poor Man’s Riches    and several other sermons, including The Bride’s Longing (on Rev 2220)

Miscellaneous sermons and other writings of Sibbes

These volumes are wonderfully edifying and warmly Christ-centered. Sibbes is one of the best of the Puritan expositors, and that's saying something!

He's often referred to as "the sweet dropper" for his insightful and uplifting writing. You'll find sound biblical counsel for the fears and temptations you face, and encouragement from the gospel for walking faithfully through life.

The volumes themselves are very well bound and fit nicely in the hand. The print is crisp and dark. All in all, the workmanship of the physical books makes the spiritual meat within a pleasure to consume.