Telling the Truth by D. A. Carson (Paperback) 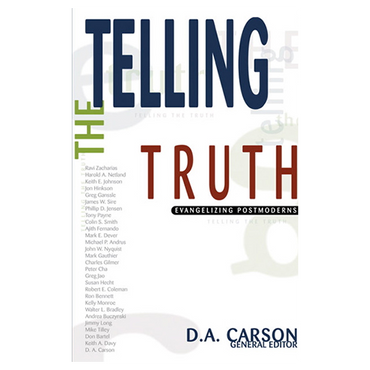 Telling the Truth by D. A. Carson (Paperback)

This thoughtful book provides cultural analysis, probes some of the most important turning-points of biblical theology, describes the experiences of those who are proving fruitful in contemporary evangelism, and exposes readers to those who are thinking hard both strategically and practically about reaching the postmodern world.

D.A. Carson is research professor of New Testament at Trinity Evangelical Divinity School in Deerfield, Illinois. He has been at Trinity since 1978. Carson came to Trinity from the faculty of Northwest Baptist Theological Seminary in Vancouver, British Columbia, where he also served for two years as academic dean. He has served as assistant pastor and pastor and has done itinerant ministry in Canada and the United Kingdom. Carson received the Bachelor of Science in chemistry from McGill University, the Master of Divinity from Central Baptist Seminary in Toronto, and the Doctor of Philosophy in New Testament from the University of Cambridge. Carson is an active guest lecturer in academic and church settings around the world. He has written or edited about sixty books. He is a founding member and currently president of The Gospel Coalition.

This is an excellent book if you have an interest in our postmodern culture, and how Christianity fits into this worldview. Specifically the challenge of applying a Christian worldview into a culture that has lost its foundations and is sliding down the slippery and illogical slope of moral relativism. While there are many great books out there on this subject including "Truth Decay", and "Steering Through the Chaos", this book takes a different approach in that it contains dozens of short essays written by numerous apologetic authors and teachers, which are then combined into sections to form this book. Of particular interest to me were the sections on "Critical Topics" and "This Relational Age". The "Critical Topics" section includes a writing by James Sire, entitled "Why Believe Anything at All?" a must read. The sections on "This Relational Age" includes some excellent work on bridge building and the importance of developing relationships as a medium to carry Christ's message of hope. I particularly enjoyed the fact that I could read several of these seven to fifteen page essays in a sitting and compare and contrast the different styles and approaches to evangelizing and "telling the truth" to a culture which is moving towards a belief that there isn't any truth.
I have deliberately kept this review focused on the style of the book and avoided overly stating my opinion on the subject matter. Whatever your opinion is, you will benefit from the wisdom and perspective of the various contributors to the book. A must read on the subject of apologetics and postmodern culture, and done in a way which doesn't require the effort and concentration level of most other postmodern discussions. I recommend reading this book first to get some framework and then move on to "Truth Decay" or other more in-depth works on the subject matter.