Christ in the Camp by J. William Jones (Hardcover) 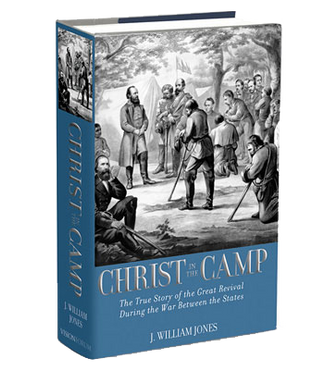 Christ in the Camp by J. William Jones (Hardcover)

In the midst of the titanic struggle of the American War Between the States, a spiritual war for the souls of men was waged with equal vigor.

From 1861 to 1865, many thousands of soldiers professed Christ as their Savior and Lord, and many more were renewed in their commitment to serve God in camp and battlefield.

Herein are recorded stories of the heroism of chaplains who stood in the line of battle to minister to the fallen and to work at the bedside of fatally ill comrades. Some of the army pastors were themselves counted among the slain. It tells of worship services in camps attended by ten, a hundred, or a thousand men gathered to hear the Word of God expounded. Here, too, we read of the Christian generals who supported the many facets of Gospel work: Robert E. Lee, Stonewall Jackson, Jeb Stuart, and others. Hardback. 624 pgs. By J. William Jones.