The Travels of True Godliness: From the Beginning of the World to this Present Day in an Apt and Pleasant Allegory 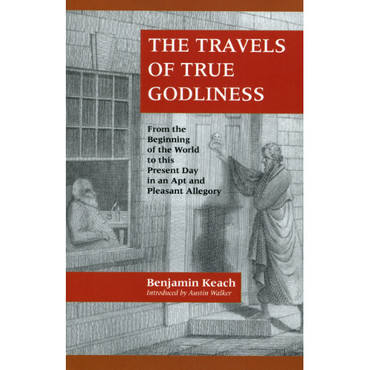 The Travels of True Godliness: From the Beginning of the World to this Present Day in an Apt and Pleasant Allegory

Benjamin Keach was an important Particular Baptist preacher, author, and ardent defender of Baptist principles, even against Richard Baxter. Often in prison and frequently in danger for preaching the Gospel, he was the first to introduce singing hymns in the worship of English congregations. In this allegory, Keach shows the travels of Godliness, and the encounters he endures. This allegory is along the lines of Pilgrim's Progress.

"After defining godliness and showing its worthy pedigree and antiquity, 'the excellent Benjamin Keach' (as he was fondly called), allegorically personifies 'Godliness,' much as Bunyan did 'Christian.' He introduces us to more than two dozen enemies of godliness, then details Godliness's encounters with several of them, including apostasy, hypocrisy, legalism, antinomianism, worldliness, and Satan. We meet in graphic detail the temptations of youth and old age, of riches and poverty, as well as the joys of contentment, thoughtfulness, kindness, and love. This is a fascinating read by the most important Baptist thinker of his day, designed to stir us up to a greater pursuit of godliness." - Dr. Joel R. Beeke, Puritan Reformed Theological Seminary, Grand Rapids, Michigan

"While The Pilgrim's Progress is the most famous of the Christian journey allegories of the seventeenth century, it is not the only one. Though nearly forgotten today, Benjamin Keach's 'The Travels of True Godliness' was in the eighteenth century nearly as popular as Bunyan's great work. It is a great blessing to see it back in print. We hope that many will read, enjoy and benefit from it." - Dr. James M. Renihan

"Most modern men don't think deeply. If there is something called 'true godliness,' for a contrast to stand, there must also be a form of religion that is not true and straight, but false. The former is rare in the world; the latter abounds even in the churches. "The Travels of True Godliness" is a road map for and about those on God's narrow way. For others, if the directions of God go unheard and unheeded, 'true godliness' will remain a quaint curiosity on the road to destruction." - Dr. Mike Renihan

"Those who adopt as one of their modes of benevolence, the distribution of awakening tracts, will find this happily suited to their purpose, and adapted to a great variety of characters. To Christians it will prove an excellent closet companion, containing judicious and satisfactory helps to self-examination, and designating the true and false marks of grace with remarkable precision. May the divine blessing attend it." - from the Preface by Howard Malcolm, editor of this revised edition, dated June 1, 1829