From Grace to Glory: A Present Day Journey Through John Bunyan's 'Pilgrim's Progress' 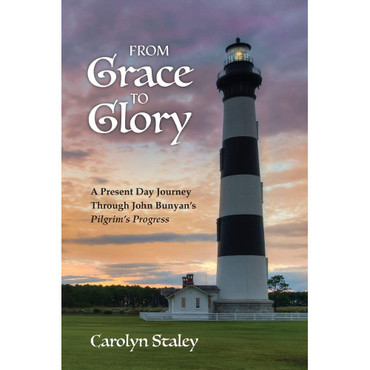 From Grace to Glory: A Present Day Journey Through John Bunyan's 'Pilgrim's Progress'

Carolyn Staley has been serving as a pastor's wife for over 45 years and she has been laboring over this exposition of PILGRIM'S PROGRESS for the last ten years.

In her own words from her Preface we read: 'My journey to the Celestial City began at the age of nineteen when the Lord opened my heart, brought me to the Lord Jesus Christ, and saved me by his grace. In those early days as a young Christian, my tendency toward morbid introspection caused great mental anguish concerning the assurance of my salvation. During that dark period, I first became acquainted with John Bunyan when I was given two of his books, Grace Abounding to the Chief of Sinners and The Pilgrim's Progress. At first I was actually afraid to read them, afraid that they would confirm my worst fears.

However, as I began to read and ponder these works written so long ago, a glimmer of hope began to arise in my mind. I was not alone after all! John Bunyan suffered the very same things and wrote of them. At last I could give a name to the spiritual turmoil I had so often experienced. It was the murky Slough of Despond. The tormenting fear that so often held my heart and mind captive also had a name, Doubting Castle, baronial estate of Giant Despair. Thus I felt an immediate affinity with the humble tinker of Bedford that greatly encouraged me in those first days of my own pilgrimage.

Many years later when I was asked to teach The Pilgrim's Progress to our teenagers in Sunday school, I gladly accepted the challenge and began an in-depth study of that great work. Using those early lessons as a foundation, I later expanded and revised them into a series of thirty meditational studies that were published in Adam's Rib, a monthly periodical especially designed for Christian women. These meditations provided the framework for an even more comprehensive study that resulted in the writing of this book.

I truly believe that we write best of what we have learned from personal experience. At this point in my own journey, I have covered much of the ground that John Bunyan's pilgrim did and met the same characters he encountered along the way. As a result, I am well acquainted with the places Christian visited, as well as the trials, temptations, and difficulties he faced. An added benefit from the Lord is the privilege of being married to a godly pastor who faithfully expounds and teaches the Word of God. For the past forty-five years, I have served by my husband's side as his helper and co-laborer. The experience I have gained through the years and the spiritual lessons learned have been of invaluable assistance in giving me a more thorough understanding of The Pilgrim's Progress.

This best known work by John Bunyan is a captivating story told in a highly dramatic setting; but for those with eyes to see, it is much more than that. The truths of which he wrote are just as relevant to the people of God today as when he penned them in the 17th century. Therefore, every true child of God will find that he is on familiar ground when reading of Christian and his journey to the Celestial City."

"I am so glad this wonderful commentary on John Bunyan's 'The Pilgrim's Progress' will soon be available! I have been looking forward to it for a long time. When I first read through the manuscript, some of my first thoughts were, "This is wonderful! Here is insightful interpretation, rich exposition, and wonderful practical application for the Christian life--this is truly quality, insightful, and excellent in every way!" Carolyn Staley has truly captured Bunyan's heart in understanding his classic work.

From the introduction and all the way through all fifty-three chapters of the wonderful work, Mrs. Staley has provided a marvelous gift to God's people in writing this superb work of exposition on Bunyan's masterful allegory. This book possibly breaks brand new ground in expounding on Bunyan's character of Christian as he journeys to the celestial city. While reading, I gained valuable new insights on certain points I have never seen or considered, and Bunyan's views on certain points were opened to me more than ever.

As is stated in the preface, the author considers at length the characters and places of Christian's pilgrimage, and has successfully endeavored to interpret Bunyan's lessons in light of the truth of Scripture. One of the great blessings of the book is the great number of scripture passages Mrs. Staley uses to interpret Bunyan's truth on the Christian life and journey. What a marvelous group study this volume will make! I heartily recommend it for that specifically.

Especially for those who have never read The Pilgrim's Progress, this book will yield rich treasures as one reads it along with Bunyan's work or just reads it by itself. Carolyn Staley has given Christ's church a marvelous book for generations to come, and I hope everyone who hears of it will buy it. I am persuaded that those who read it will be very thankful they did!"