The Pastor in Prayer by Charles Spurgeon (Hardcover) 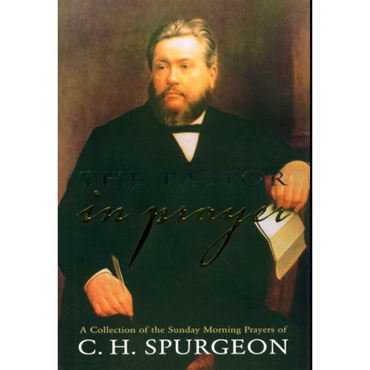 The Pastor in Prayer by Charles Spurgeon (Hardcover)

When the American evangelist D.L. Moody spoke in the Metropolitan Tabernacle in October 1892, he recalled an earlier visit twenty-five years previously. He had come four thousand miles, he said, to hear C.H. Spurgeon, but what impressed him most was not the sermon, nor the singing of the great congregation, but Spurgeon’s prayer. Such was his access to God that he seemed to be able to bring down power from heaven. This was the great secret, Moody believed, of Spurgeon’s influence and success.

This collection of prayers drawn primarily from Sunday morning services at the Tabernacle will make a similar impression on readers today. In this book we see Spurgeon come into the presence of God with deep reverence, yet with unquestioning child-like confidence, to plead God’s promises in Scripture and to revel in the nearness to God into which Christ has brought all who believe.

The Pastor in Prayer will inspire those who lead public worship and all Christians with a fresh sense of the privilege of prayer, and a renewed desire to ‘come boldly to the throne of grace’, there to ‘obtain mercy and find grace to help in time of need’.

I started reading this book during a break in ministry as a devotional to refresh my soul. I had this book for a few years now and I thought I finally get around to reading it. It turns out that the book really ministered to my heart and I was glad I read it.
The book has a biographical introduction to the author Charles Brown that was written by the biographer Iain Murray of Banner of Truth. I found the biographical sketch helpful since I didn't know anything about the author before I read the book and learning a little more about this largely forgotten nineteenth century Scottish preacher prepared me to want to read the rest of the book in order to learn more from a great man of God and faithful minister of four decades. The book was an adaptation of several addresses that Charles Brown delivered for the Free Church of Scotland with attention towards ministers and seminarians. The first chapter argues for the connection between Godliness and Christian ministry, the second on public prayer, the third on preaching and the fourth on elements of pulpit power. There is an appendix that ought to be a chapter in of itself on various other aspect of pastoral ministry followed by one of Brown’s sermon that is a great example of Gospel driven preaching.
The book is short and is a plus in many ways: first it is the perfect size for a pastor's devotional. Secondly, the author is concise and to the point. Thirdly, its spiritual impact is greater than its size; in reviewing this book I was pleasantly surprised how much of the book I highlighted that fed my soul. The following are some of the valuable gems in the book:
• Reverend Brown is a man of deep prayers. For instance, he devotes a while chapter to public corporate prayer. I appreciate his practical and pastoral reasons for short public prayers. He doesn’t merely give a pragmatic argument but argues for the benefit of the spiritual well being of the congregation. Even when he talks about sermon preparation and visitation he talks about the importance of prayers.
• Brown presented an excellent two point argument for the importance of godliness in the ministry but he doesn’t just leave the readers there; he had some helpful practical hints to strive for personal holiness such as reading more works that are more personal and experimental in character. I love also seeing Brown’s recommendations, which are all Christian classics and one that stood out to me is his recommendation to read Rutherford’s Letter’s since I didn’t know it had such an effect on Brown. I’ll definitely be keeping my eye out for Rutherford’s work, which previously I have known about only as the man who wrote Lex Rex.
• I love his illustration of the Word of God being like a gem, arrow and bait in that it is what the minister must master if they are going to preach evangelistically and powerfully.
• Brown is against manuscripting a sermon; he argues that one should have an outline instead in order to ensure that one is able to look at the eyes of people and to ensure what Brown quoted from John Livingstone as saying “I was more helped in my preaching by the thirsty eyes of the people than anything else.” Livingstone’s quote must have made a profound impact on Brown since he quoted him twice in the book.
• I have always felt that as a preacher I should spend more time and effort preparing a conclusion well than the introduction given that it’s important to “land” the sermon properly and to drive home to the hearers a call to respond. It is wonderful to see a successful preacher with forty one years of experience affirming my conclusion.
• Brown did share his one regret in ministry was that he wished he got to ministered to the younger members more. A lesson well taken.
I definitely recommend this book for pastors young and old to read. I also recommend this for lay people to get this as a gift for their pastors.