Lectures to My Students by Charles Spurgeon (Hardcover) 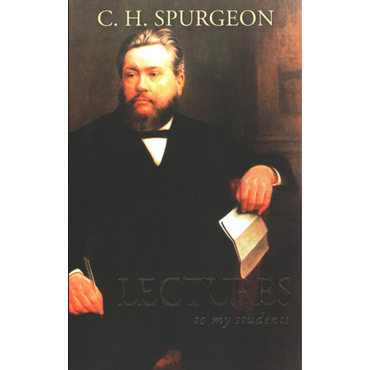 Lectures to My Students by Charles Spurgeon (Hardcover)

While C.H. Spurgeon is still remembered as being the most popular preacher of the Victorian era, it has generally been forgotten that the influence he exercised on fellow ministers and theological students was possibly an even greater factor in his life than his own personal ministry. That he organized a college, supervised the training of some 845 students, presided at an annual conference of ministers, and regarded all this as his ‘life’s labour and delight’ are facts that are little known today.

Spurgeon’s Lectures to my Students, contain the substance of Spurgeon’s regular Friday afternoon addresses to the college students. This new complete and unabridged Banner edition, which as been newly typeset, contains all the lectures in the original first and second series, including The Minister’s Self-Watch, The Preacher’s Private Prayer, The Minister’s Fainting Fits, The Holy Spirit in Connection with our Ministry, The Need of Decision for the Truth, and On Conversion as our Aim. Also included is a third series of lectures, originally published as The Art of Illustration, which focuses on the nature, use, and sources of illustrations and anecdotes in preaching. To make this new edition as complete as possible, the publishers have also included Spurgeon’s Commenting and Commentaries, which contains two further lectures and a fascinating and often humorously annotated catalogue of commentaries. This catalogue, compiled by Spurgeon after a review of some three to four thousand volumes, is anything but dull: calculated to produce enthusiasts for books, it also opens up a new world by its well placed signposts to the riches of the past.

Charles Haddon Spurgeon was born in 1834 and was converted at the age of 16. By the age of 17, he was already adept enough in the Word of God that he was called to shepherd one of the local churches. During his lifetime, he published over 1900 different sermons. Each was original and thought-provoking. Those who have read his sermons know that each message was filled with the Word of God and sought to bring honor and glory to Christ alone. The teaching done by Spurgeon in these 28 lectures is a skill that has almost completely vanished from among pastor-teachers today. This 443 page book reflects just one reason why he was called, "The Prince Of Preachers" and "A Master Pulpiteer." Spurgeon's teachings and messages will go on in Christendom as being revelant to any age in any decade. The ministerial student will do well to study these lectures and seek the guidance of the Holy Spirit in applying them to their ministry. The experienced minister should also take the time out of often hectic schedules to study what made this "Prince of Preachers" a prince among preachers. No minister should ever be able to find fault with this classic. This contents of this book and the author should never be considered to be "out-of-date" and "not up-to-par in this modern world." It is a timely piece which I thoroughly enjoyed. I would highly recommend it be read over and over again.