Knowing Where We Stand: The Message of John's Epistles by Peter Barnes 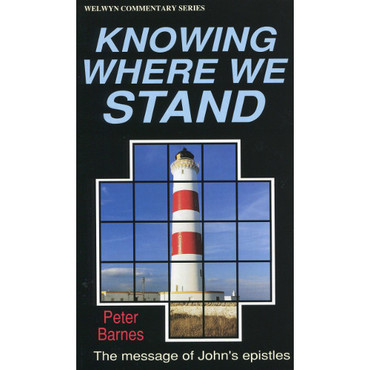 Knowing Where We Stand: The Message of John's Epistles by Peter Barnes

'Assurance is not essential to salvation, but it is essential to the joy of salvation,' as Dr Martyn Lloyd-Jones once said. John, who was by this time probably the last surviving apostle, wrote his first epistle to those who believed in the name of the Son of God in order that they might know that they possessed eternal life.In these days of spiritual and moral decline we stand in particular need of the message of John's epistles. We need to test ourselves first to see where we stand before God and then, with charity of heart and clarity of mind, we need to test the claims of others too. That is why John's epistles are so important for us.

With good reason Martin Luther wrote of 1 John: 'I have never read a book written in simpler words than this one, and yet the words are inexpressible.'In this commentary Peter Barnes shows how John gave his readers three main tests so that they could come to assurance of salvation and could tell, among the conflicting claims of different groups within the church, who was right and who was wrong on spiritual matters. These three themes of right belief, love and obedience also figure prominently in John's shorter, and more personal, second and third epistles.

"Peter Barnes has written an excellent commentary on John's epistles. It is a thorough, stimulating and informed study of these epistles. his is a valuable tool for pastors, students and laymen. I heartily recommend it." - John D. CurridAssociate Professor of Old TestamentReformed Theological SeminaryJackson, Mississippi