Epistle to the Hebrews by John Owen (Paperback) 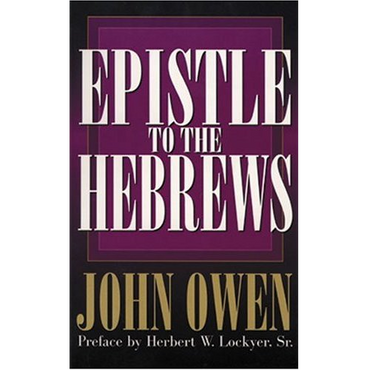 Epistle to the Hebrews by John Owen (Paperback)

After sixteen years of in-depth study in the book of Hebrews, John Owen produced eight volumes of insightful scholarship that have enriched students of the Bible for over three hundred years. Owen's classic work has now been condensed and the fruits of his scholarship made more accessible. In commenting on Owen's life, Dr. Herbert Lockyer, Sr. writes, "This mighty man of God enjoyed an extraordinary measure of spiritual power, producing in him a life of faith, of self-denial, and of heavenly tranquility....Deep humility of disposition was characteristic of this man of eminent talents. Gifted and honored beyond degree, John Owen sought to be unconscious of his own superiority. The prominent feature of his character was the recognition of the supreme authority of the Bible and his ability to expound it." As one biographer put it, "He counted it a higher honor to be John Owen, a servant of Jesus Christ than a Doctor of Divinity by human creation."

John Owen (1616-1683) was an early Puritan advocate of Congregationalism and Reformed theology. Educated at Queen's College, Oxford, he served under the Puritan government of Oliver Cromwell as personal chaplain to Cromwell and later as vice-chancellor of Oxford. A contemporary of John Bunyan, Owen's extensive body of work includes some twenty-eight books on theological and devotional themes. His later years were spent in pastoral ministry where he served as the leading spokesman for the Protestant Nonconformists.
Endorsement
Great book and great theologian you can appreciate how Owen has an awesome impact today he has great depth in the scriptures.Your service has been excellent.