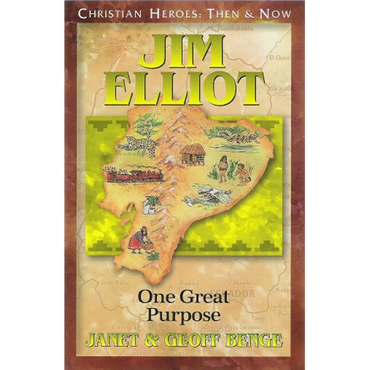 Jim and Pete turned to see the Auca men, their deadly spears raised, running toward Nate, Ed, and Roger. Jim stood in the river, his hand on his pistol. Should he defend himself? He already knew the answer. Each man had promised the others that he would not save himself by killing those they had sought out in Jesus' name. Jim Elliot and his coworkers surrendered their lives in Ecuador's jungle, trusting that their sacrifice would not be in vain. Decades later, this dramatic event has challenged countless Christians to live with one great purpose: to bring the gospel to those who have never heard.

Janet and Geoff Benge are a husband-and-wife writing team with more than twenty years of writing experience. Janet is a former elementary-school teacher. Geoff holds a degree in history. Originally from New Zealand, the Benges spent ten years serving with Youth With A Mission.
Endorsement
Jim Elliot was a great book. I recommend you read it if you like books about savage Indians, missionaries, forgien contries and their jungles, or all of the above. Jim Elliot finds a partner, learns some new languages and travels to South America, all because he feels God calling him to become a missionary. An interesting part of this book was a funeral party where the people who came weren't even remotely sad about the death of a little girl. Jim had taught them that they would see the dead girl again in heaven. It inspired me to listen to God as I make plans for my future and to be open His plans.