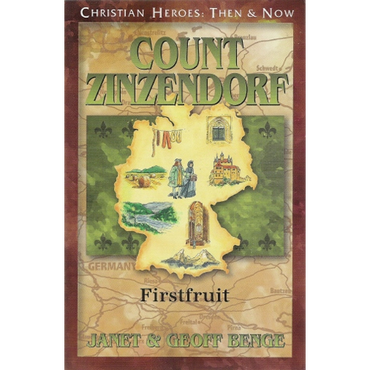 An unusually mature Christian at a very young age, Count Nicolaus Ludwig von Zinzendorf did not follow the course dictated by his noble birth but followed God's call even to the point of being banned from his native Saxony. Once destined for the royal court, the count instead became a spiritual father to millions. Count Zinzendorf opened his estate to persecuted Moravian Christians, and under his leadership this vibrant community launched the modern missions movement. Beginning at Herrnhut and traveling as far as Africa, America, and Russia, the bold believers of the Moravian Church planted seeds that continue to bear fruit even today.

Janet and Geoff Benge are a husband-and-wife writing team with more than twenty years of writing experience. Janet is a former elementary-school teacher. Geoff holds a degree in history. Originally from New Zealand, the Benges spent ten years serving with Youth With A Mission.
Endorsement
I have admired Ludwig Zinzendorf from afar for the last 20 years, but had never seen a biography before finding the Benge's children's version. (I have read Craig Atwood's, PhD Princeton Seminary, scholarly account of one of the missional towns that Zinzendorf's followers launched in the United States, which raised my interest in Zinzendorf, and so I was thrilled to find a biography suitable for children).

Last night I just finished reading chapter ten to my six and four year old boys. If you don't know Zinzendorf, here are a few highlights the book will introduce:

1) A Passion for Prayer. The "Moravian" community Zinzendorf led started a 24-7 continuous prayer chain that lasted for over 100 years.

2) The Missional Life. Missions was almost non-existent among Protestants in the 17th century. Zinzendorf's Moravians played a central role in launching the Protestant missions movement. They were radically committed to Christ, and were willing to suffer greatly to proclaim the greatness of his name. The Benge's biography reports that 25 of the first 29 missionaries they died on the field. The Moravians are known to have sold themselves into slavery in order to share the gospel with the slaves...the Benge's biography describes in one chapter how a slave-owner had cut the ears off a slave who had been caught listening at the white slave owner's church. For these slave owners, Christianity was a "white man's religion." Dozens of Moravian missionaries died to destroy this lie.

3) A dangerous life. The Benge's have done an outstanding job of making Zinzendorf's story readable and interesting to kids. They are great writers, and weave in many of the exciting events from Zinzendorf's fascinating life. They do a good job with "scene selection;" the book begins with a flash-forward to a dangerous missionary negotiation with American Indians, who think Zinzendorf is an agent for colonial powers and are making plans to kill him. The next chapter begins with a scene of Zinzendorf as a six year old, studying the Bible and praying as his castle is invaded in a surprise raid by renegade soldiers. There are also stories about the "mustard seed" club he forms at age 12 with four other friends. This "band of brothers" took a vow to do whatever they could to take the gospel to the ends of the earth during their lives. They kept their vow. What an awesome challenge for today's youth!

Overall, I give this book five stars. For parents looking for a book to read to their kids that will prompt good discussions after each chapter, I can't think of a better book to move to the top of your reading list...ok, I can... a children's version of Pilgrim's Progress should be at the very top this year and every year (try the Moody Press version). I may be slightly euphoric in my delight at finding a way to introduce my kids to Zinzendorf, but this is one of the best I have read to my kids. It will inspire you and your children towards the missional life and will introduce kids to one of the most significant figures in Protestant mission history. Try it!