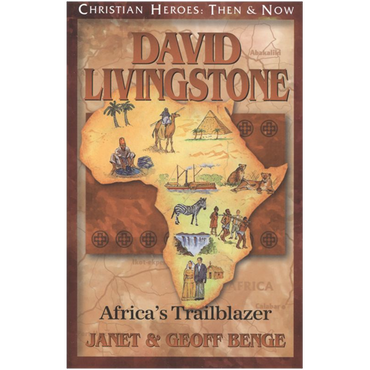 With the heart of an explorer and the passion of an evangelist, David Livingstone mapped vast, unexplored areas of Africa, sharing the gospel with whomever he encountered. His stamina, perseverance, and dogged determination created the legacy of a trailblazing explorer with an undying hunger to make Christ known wherever his steps led him. David Livingstone's captivating adventures and tireless zeal continue to inspire countless men and women to bring the gospel message of God's love to those souls who have never heard.

Janet and Geoff Benge are a husband-and-wife writing team with more than twenty years of writing experience. Janet is a former elementary-school teacher. Geoff holds a degree in history. Originally from New Zealand, the Benges spent ten years serving with Youth With A Mission.
Endorsement
Throughout his life, David sacrificed all: his family, creature comforts, and his own health to open Africa to future missions. I suppose the reason others were disappointed in this book is because David was not a traditional missionary. However, God called him and he obeyed.

David's missions were a huge success in my mind. The Kalahari, trecherous rivers, bug infested jungles, and mud swamps were not going to stop him!! He travelled where no white man had travelled before, was a kind man, and embraced the Africans. This was a monumental step in keeping communication open to future missionaries and opening up unexplored areas where new mission stations could later be established. He planted the seed of missions in Africa, if you will. It parallels the thought that as we share the gospel with others, we could simply be planting seeds and then others will come along behind and help that planted seed to sprout. We won't always see the fruit of our labors, and although David saw some fruit, he had just begun the task of introducing Africans to God. After he passed on, it became the job of other missionaries to go in behind him to help the seeds to sprout.

I also see him not as a deadbeat dad, but as a man sold out to God. He and his children sacrificed in order that he may obey God. What more of a testimony to his children could he have given? After all, God doesn't say to obey only after the kids are grown and gone. We are to obey all the time no matter what. I was truly humbled by David's life and sacrifices and cried as the book came to a close.