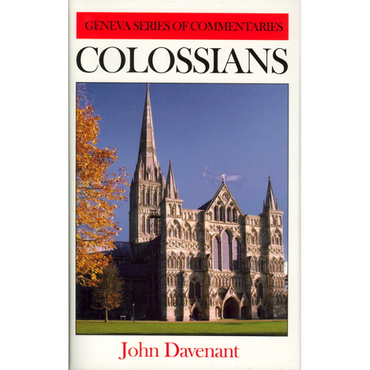 John Davenant (c. 1576-1641), was a graduate of Cambridge. At the age of thirty-three he was awarded his D.D. and was made Lady Margaret's Professor of Divinity in the University. A member of the Church of England delegation to the Synod of Dort, King James I later appointed him Bishop of Salisbury in 1621, a position he was to retain until his death in 1641. He authored the commentary on Colossians (originally written in Latin) in the Trust s Geneva series, in which a 'Life of Bishop Davenant' by the editor and translator Josiah Allport is included.

C.H. Spurgeon, in his famous work, Commenting and Commentaries, placed Davenant on Colossians in the first rank of commentaries on this Pauline epistle and approvingly quoted the words of Charles Bridges about this volume: ‘I know no exposition upon a detached portion of Scripture (with the single exception of Owen on the Hebrews) that will compare with it in all parts…in depth, accuracy, and discursiveness.’

On the title page of an old Latin edition a satisfied reader made a note of his deep appreciation for Davenant’s masterpiece: ‘Don’t abuse this good old book: for it is an extraordinary piece, and the best Exposition on St. Paul’s Epistle to the Colossians that ever was published…and I am afraid there will never be a better so long as the world endures.’

The preacher James Hervey expressed his appreciation of this commentary in more measured terms. ‘For perspicuity of style and accuracy of method; for judgment in discerning and fidelity in representing the Apostle’s meaning; for strength of argument in refuting errors, and felicity of invention in deducing practical doctrines, tending both to the establishment of faith, and the cultivation of holiness, it is inferior to no writing of the kind; and richly deserves to be read, to be studied, to be imitated, by our young divines.’

On the strength of such high recommendations as these, the Trust is making available this ‘much praised’ commentary with the prayer that it will continue to instruct, encourage, and sanctify the faith and life of Christian people in the 21st century.

When one gets into the Book of Colossians one finds that its themes are so major and vital and defended and emphasized in this important Biblical book.
Besides of course all revolving around Christology, Deterding's commentary sees further the vital doctrines of creation and eschatology. Thus, this commentary will certainly serve a major place in the life of Christ's church.
The false teaching that Paul exposes and condemns in this letter to the church at Colossae is herein expounded upon by Deterding's fine exegesis. He sees one of the greater benefits of this letter as Paul's contribution to the relationship between Christology and cosmology. He in the author's view: "Colossians expounds upon the relationship of Jesus Christ to the created order, for the letter presents Christ as both Creator and Reconciler of the universe."
Further, this work ackowledges that Colossians presents serious textual problems. Thus, a proper commentary will treat this issue carefully and thoughtfully, as this volume certainly does.
The structure of this Commentary Series is delightful to use: Translation from the Original language, followed by Textual Notes which address the formal issues as the textual criticism and other exegetical highlights; followed by the Commentary section which seeks to provide a running interpretive description of what the Lord of the church wants to communicate through Paul; finally, various excursus supplement the rest of this commentary with well done essays on such as "Pauline Anthropology, The Powers," etc.
This commentary addresses the heresy in the Colossians with the resounding clear message of Christ for the Colossians and all people in the reconciliation of the cross. This reviewer truly appreciated the fine work given to one of the favorite evangelism sections of the NT, Col. 4:2-6! One of the strong attributes of this commentary is the emphasis on the pure proclamation of the Gospel, e.g. "As this mystery is proclaimed, God the Holy Spirit works through it to create and sustain in the hearer saving faith; through such faith the mystery becomes known. Thus the power for understanding the mystery of the Gospel comes from the proclamation of the Gospel mystery itself."
This is well done, faithful to the Word tool for the life of Christ's church. Deterding's research and insights into this letter will benefit the church and any Christian who wishes to delve deeper into this book.