Ashamed of the Gospel by John MacArthur (Hardcover) 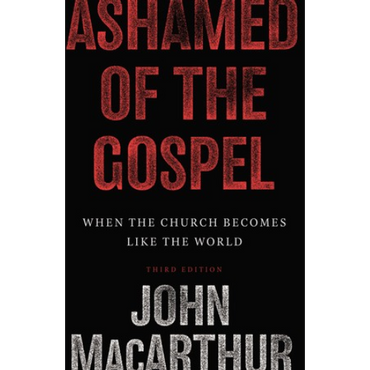 Ashamed of the Gospel by John MacArthur (Hardcover)

John MacArthur is the pastor of Grace Community Church in California and president of The Master’s College and Seminary, as well as a best-selling author. He can be heard on the “Grace to You” radio program, which broadcasts daily around the world on nearly 2,000 stations in English and Spanish.

In the third edition of this top-selling book, John MacArthur challenges the seeker-sensitive, user-friendly, entertainment-oriented pragmatism that permeates the church today. In the late 1800s, Charles Spurgeon warned that the church was drifting away from the purity of the gospel, candy-coating God's Word rather than boldly proclaiming the truths of Scripture. As a result, Christianity's influence in nineteenth-century England was severely weakened. One hundred years later, John MacArthur, troubled by the seeker-sensitive movement and an emphasis on pragmatism within the church, sounded the same alarm with the first edition of Ashamed of the Gospel. In this newly revised and expanded edition, MacArthur gives an overview of developments in the seeker-sensitive movement since his book was first published in 1993. New material traces the line of pragmatic philosophy from the seeker-sensitive movement through the Emergent phenomenon, explaining why the latter is a philosophical heir of the former-and an even greater danger; chronicles the failure of pragmatic approaches to church growth; and emphasizes the importance of evangelicals solidly committed to biblical doctrine rising to positions of leadership.

Dr. John MacArthur is a pastor-teacher who is not ashamed to biblically address issues that may even make someone mad. He has done this with his books THE GOSPEL ACCORDING TO JESUS, FAITH WORKS, RECKLESS FAITH, CHARISMATIC CHAOS, and this work as well. In each of his books Dr. MacArthur provides his reader not only a fair survey of the topic/movements but also gives his readers biblical exposition on the subject.

In this work, Dr. MacArthur reviews the seeker sensitive movement (he has done this again in his book HARD TO BELIEVE). He uses the infamous Down-Grace controversey during the late 1800's in England and the stand taken by Charles Spurgeon against the down-graders. Just as Spurgeon saw the down-grade as moving away from the true gospel of grace, MacArthur see's the modern seeker sensitive churches moving away from a true biblical gospel toward a user-friendly, worldly, flesh based gospel that is pragmatic at best.
If you are a person who struggles with church growth or possibly a pastor who wants to see their church grow but you frown on much of the church growth movement then I would encourage you to read this book. Allow God to show you His sovereignty in building His Church through His servant Dr. John MacArthur.