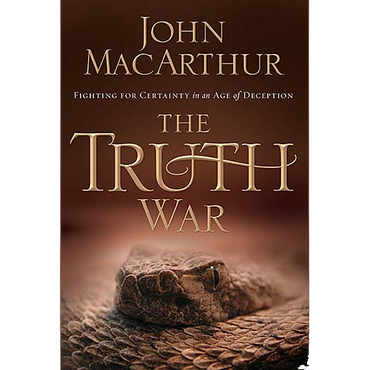 John MacArthur is the pastor-teacher of Grace Community Church in Sun Valley, California, president of the Master’s College and Seminary, and featured teacher with the Grace to Youmedia ministry. In more than four decades of ministry, John has written dozens of bestselling books, including The MacArthur Study Bible, The Gospel According to Jesus, and Slave. He and his wife, Patricia, have four married children and fifteen grandchildren.

Right now, Truth is under attack, and much is at stake. Christians are caught in the crossfire of alternative Christian histories, emerging faulty texts, and a cultural push to eliminate absolute Truth altogether. As a result, many churches and Christians have been deceived. Worse still, they propagate the deception that poses itself as Truth! In The Truth War John MacArthur reclaims the unwavering certainty of God's Truth and anchors Christians in the eternal, immovable promises that are found in His Word.

A number of weeks before this book was announced, I wrote to Dr. MacArthur asking if/when he might write a book such as this. Imagine my delight when I learned that one WAS going to be released and soon!

The Emergent Church is creating havoc within Christendom. Like Gnosticism and the Judaizers of the early church, the blantant error that is coming in like a flood into the modern-day church needs to be brought under the truthful light of Scripture, where it will not survive. That can only happen when faithful and courageous Christians are willing to call into question the very things that are being espoused. Paul, Jude, James, Peter - none of these men hesitated to call error error. Paul especially named names. There MUST be a willingness among Christians today to stand against the error in whatever form it comes. The Bereans even applied Paul's teachings to the litmus test of the Scriptures and it did not bother Paul at all. In fact, he seemed to applaud it! Yet, when what is being taught today is questioned, then those asking the questions are accused of being "legalists," "hatemongers," or "divisive." If this is so, then certainly Christ was "divisive" as was Paul, Jude, James, Peter and numerous others who stood against the tide of lies that literally sprang from Satan's domain.

Too often in today's desire to be ecumenically "inclusive," not only are lies allowed, but they are often encouraged, as if the lie itself does no harm and is simply a matter of denominational variance. In truth, many of the lies that are being promulgated by Brian McLaren, Tony Campolo, Rick Warren and others attack the very foundation upon which Christianity rests!

Dr. MacArthur's book could not have come at a more appropriate time in the life of the church. I pray that its message will be heeded by true Christians everywhere. The fight for truth is not an option.