Ashamed of the Gospel: When the Church Becomes Like the World by John MacArthur 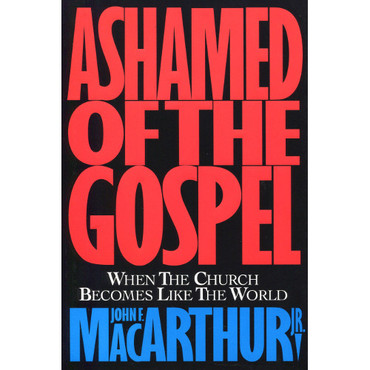 Ashamed of the Gospel: When the Church Becomes Like the World by John MacArthur

Widely known for his thorough, candid approach to teaching God’s Word, John MacArthur is a popular author and conference speaker and has served as pastor-teacher of Grace Community Church in Sun Valley, California since 1969. John and his wife, Patricia, have four grown children and fourteen grandchildren.
John’s pulpit ministry has been extended around the globe through his media ministry, Grace to You, and its satellite offices in seven countries. In addition to producing daily radio programs for nearly 2,000 English and Spanish radio outlets worldwide, Grace to You distributes books, software, audiotapes, and CDs by John MacArthur.

John is president of The Master's College and Seminary and has written hundreds of books and study guides, each one biblical and practical. Best-selling titles include The Gospel According to Jesus, Truth War, The Murder of Jesus, Twelve Ordinary Men, Twelve Extraordinary Women, and The MacArthur Study Bible, a 1998 ECPA Gold Medallion recipient.

Dr. John MacArthur is a pastor-teacher who is not ashamed to biblically address issues that may even make someone mad. He has done this with his books THE GOSPEL ACCORDING TO JESUS, FAITH WORKS, RECKLESS FAITH, CHARISMATIC CHAOS, and this work as well. In each of his books Dr. MacArthur provides his reader not only a fair survey of the topic/movements but also gives his readers biblical exposition on the subject.

In this work, Dr. MacArthur reviews the seeker sensitive movement (he has done this again in his book HARD TO BELIEVE). He uses the infamous Down-Grace controversy during the late 1800's in England and the stand taken by Charles Spurgeon against the down-graders. Just as Spurgeon saw the down-grade as moving away from the true gospel of grace, MacArthur see's the modern seeker sensitive churches moving away from a true biblical gospel toward a user-friendly, worldly, flesh based gospel that is pragmatic at best.
If you are a person who struggles with church growth or possibly a pastor who wants to see their church grow but you frown on much of the church growth movement then I would encourage you to read this book. Allow God to show you His sovereignty in building His Church through His servant Dr. John MacArthur.