Above All Earthly Pow'rs by David F. Wells (Paperback) 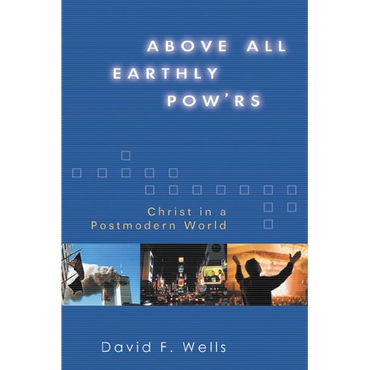 Above All Earthly Pow'rs by David F. Wells (Paperback)

David F. Wells is the Andrew Mutch Distinguished Professor of Historical and Systematic Theology at Gordon-Conwell Theological Seminary. An ordained Congregationalist minister, he is also the author of more than a dozen previous books.

In our postmodern world, every view has a place at the table but none has the final say. How should the church confess Christ in today’s cultural context? Above All Earthly Pow’rs, the fourth and final volume of the series that began in 1993 with No Place for Truth, portrays the West in all its complexity, brilliance, and emptiness. As David F. Wells masterfully depicts it, the postmodern ethos of the West is relativistic, individualistic, therapeutic, and yet remarkably spiritual. Wells shows how this postmodern ethos has incorporated into itself the new religious and cultural relativism, the fear and confusion, that began with the last century’s waves of immigration and have continued apace in recent decades. Wells’s book culminates in a critique of contemporary evangelicalism aimed at both unsettling and reinvigorating readers. Churches that market themselves as relevant and palatable to consumption-oriented postmoderns are indeed swelling in size. But they are doing so, Wells contends, at the expense of the truth of the gospel. By placing a premium on marketing rather than truth, the evangelical church is in danger of trading authentic engagement with culture for worldly success.

Wells certainly does a mounumental job here of taking on Christ in our Postmodern World. For to do so, one must take on what is postmodernism and what are it's various outcroppings in the culture and church.

What started out as a very exciting work for this reviewer through the four chapters of eight, slowed down significantly after diagnosing the cultural scene. Here Wells is at his best as he brings together many concepts and "-isms" coordianting them under the main heading of "spiritual vs. religion." These terms definitions have changed from what I have been thinking they were, and he presents convincing evidence here. This for many will be the most useful portion of the book for many readers.

When he shifts in chapter five to Christ in the meaninglessness and the church's aberrations of it, it seemed to drag signficantly for me. Maybe it was that this was simply a rehash of what I already knew and was aware of or possibly his extended engagement with open theism, etc. which caused the losing of "one star", but this certainly was letdown of expectations.

He did redeem himself slightly in closing admonition about authenticity of church and marketing of seeker services.

One can be rewarded by this read, least of which is Wells' perceptive insights into vast literature on these subjects and footnotes and bibliography for followup.

The church certainly is being lied to when it is exhorted to change or die, be it from the Spong's of this world or the Rick Warren/Bill Hybels. As this fascinating read suggests: they are kissing cousins.

What is left out is any examination of the seductive tendencies to falsely separate doctrine from practice, or substance from style. See Klem Preus' great book on this, so inaptly titled: Fire and Staff.