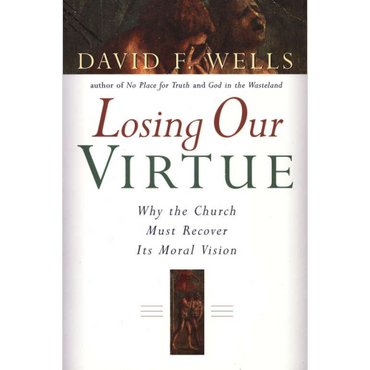 David F. Wells is the Andrew Mutch Distinguished Professor of Historical and Systematic Theology at Gordon-Conwell Theological Seminary. An ordained Congregationalist minister, he is also the author of more than a dozen previous books.

In Losing Our Virtue: Why the Church Must Recover Its Moral Vision, theologian David Wells argues that the Church is in danger of losing its moral authority to speak to a culture whose moral fabric is torn. Although much of the Church has enjoyed success and growth over the past years, Wells laments a “hollowing out of evangelical conviction, a loss of the biblical word in its authoritative function, and an erosion of character to the point that today, no discernible ethical differences are evident in behavior when those claiming to have been reborn and secularists are compared.” The assurance of the Good News of the gospel has been traded for mere good feelings, truth has given way to perception, and morality has slid into personal preference. Losing Our Virtue is about the disintegrating moral culture that is contemporary society and what this disturbing loss means for the church. Wells covers the following in this bold critique: • How the theologically emptied spirituality of the church is causing it to lose its moral bearings • An exploration of the wider dynamic at work in contemporary society between license and law • An exposition of the secular notion of salvation as heralded by our most trusted gurus—advertisers and psychotherapists • A discussion of the contemporary view of the self • How guilt and sin have been replaced by empty psychological shame • An examination of the contradiction between the way we view ourselves in the midst of our own culture and the Biblical view of persons as created, moral beings Can the church still speak effectively to a culture that has become morally unraveled? Wells believes it can. In fact, says Wells, no time in this century has been more opportune for the Christian faith—if the church can muster the courage to regain its moral weight and become a missionary of truth once more to a foundering world.

David Wells' "Losing Our Virtue" is a stinging assault on the idolatrous nature of postmodern man. Chock full of astute observations about the utter lack of morality within American popular culture and the creeping destruction of Christianity caused by compromises with that culture, this book is a clarion call to intelligent people who understand that only through the death of self and utter submission to the God of the Christian Bible can the we hold out hope for the future.
Prophetic in its intensity (though similar arguments were voiced by Francis Schaeffer long before Wells), "Losing Our Virtue" discusses how the combination of deconstructionist theology and psychology at the nascence of the 20th century brought us to the point that we call black white and white black. He outlines the rise of self at the expense of traditional Christian views of God, sin, and the cross of Christ, showing how modern culture now exists in a moral vacuum that has in its brazenness supposedly killed God and therefore any guilt that may arise from acknowledging that He transcends us. With self now ensconced as the moral center, absolute truth and morality are jettisoned in favor of each person being his own moral center. That this can only breed relativism and the eventual destruction of all things moral, is a point well covered in the book.
In some ways, perhaps too well covered. The first few chapters and the last chapter are brilliant. At the cost of a star, though, the middle sags as Wells builds his arguments. The problem lies in beating the points along his path to his conclusion to death. This book probably could have been cut down to 120 pages and would have made its point more efficiently. Metaphorically, you can kill the vampire with an effective stake through the heart. You don't have to then stuff it with garlic, douse it in "holy water", and bury it in a silver coffin lined with crucifixes under a running stream.
The section on the differences between "Guilt" and "Shame" was also confusing since Wells mixed conflicting viewpoints and counterpoints together, making it hard to tell exactly what his point was until the very end of the section. Again, a bit better editing would have made the book a smoother read.
This is an intellectually challenging book that demands close attention. And despite the author's attempt to end on a more upbeat note, it is hard to close this book and think any other outcome than the utter corruption of the entire world and most of Christendom is a foregone conclusion. Hopefully, readers will come away with a burning desire to make a difference rather than conceding that all is lost.