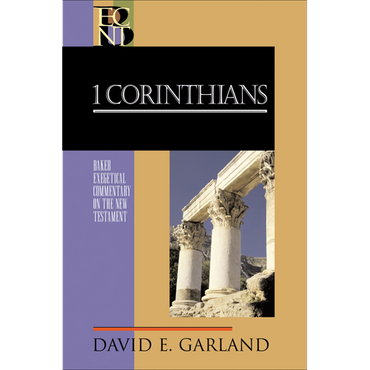 David Garland has written a major new commentary on Paul's First Letter to the Corinthians. His detailed study of one of the most important epistles in the New Testament is sure to become a standard resource for pastors, students, and scholars. After an introductory chapter that considers the context of the epistle and what is known about the social setting and cultural world of Corinth, Garland turns to his exegetical study. In order to maintain the overall flow of Paul's thought and show the larger themes more clearly, the verse-by-verse comments are organized in larger exegetical units. For each unit, the author provides a summary that locates it within the broader context of the surrounding material, and he provides his own translation of the Greek text. The author's wealth of knowledge and exhaustive research is evident in his exposition. To clarify the meaning of the text, he incorporates references from parallel material in the Pauline corpus and from extrabiblical sources that highlight relevant aspects of the religious, cultural, and social context. Throughout his study, Garland interacts with notable previous commentators and provides extensive notes for the reader's consideration and further research. Relevant text-critical issues are discussed in a section labeled "Additional Notes." There biblical scholars will find comments on the more technical aspects of the text, including variant readings and grammatical issues. As with the other volumes in the Baker Exegetical Commentary on the New Testament, the author provides a scholarly commentary on the text that will be useful and readable for preachers and thoughtful lay readers. The oft-praised BECNT format and design make the volume even more accessible.

Several years ago (before Garland's book came out) I did a fairly detailed study over about 6 months on the book of 1 Corinthians. I relied fairly heavily on the commentaries by Thiselton and also by Fee. In the subsequent years, I frequently re-read sections of both commentaries. Recently I wanted to get a more clear understanding of the controversial passages about headcovering and women's silence (in chapters 11 and 14, respectively) so I re-read the relevant portions of both commentaries again. I was pretty unsatisfied with both so I went to the library to see if I could find anything else more insightful. Happily, I encountered Garland's book.

Garland's book was much more helpful than either Thiselton or Fee. It was more lucid, kept the same high level of scholarship, and even touched on application! I continued reading the book and have come to the conclusion that it is the best commentary on 1 Corinthians available, for several reasons:

- It interacts with all the major views of a given position without becoming too bogged down (something that I think happens often with Thiselton). It is still a long book, but substantially shorter than Thiselton's.

- It has excellent scholarship with a good degree of balance. Fee, in contrast, holds to extreme views on the controversial women passages (such as arguing that 1 Corinthians 14:33-34 wasn't even written by Paul!).

- Garland lightly touches on application. While the majority of the book is on exegesis, Garland helpfully states the relevance of his conclusions to church life today. Thiselton does not really do this, which is unfortunate.

- His prose is lucid and sharp.

In summary, I believe that Garland's volume is now the best commentary on 1 Corinthians available. Bravo to Baker for this volume. Hopefully other books in the series will have the same standard of quality.