1 and 2 Timothy and Titus, Geneva Commentaries by Patrick Fairbairn (Hardcover) 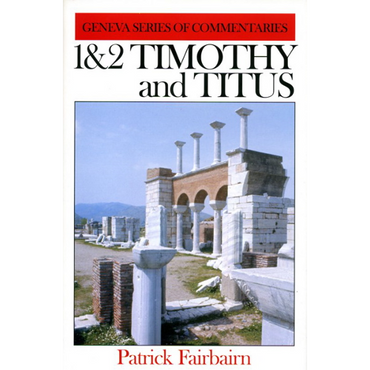 1 and 2 Timothy and Titus, Geneva Commentaries by Patrick Fairbairn (Hardcover)

Patrick Fairbairn (1805-74) was one of the outstanding galaxy of biblical scholars and theologians who adorned the first days of the Free Church of Scotland following the Disruption of 1843. He combined extensive experience of pastoral work with many years of well-regulated and exacting study of Scripture and the disciplines ancillary to its interpretation. Indeed, from the outset of his ministry he determined to be obedient to the apostolic exhortation to be 'a workman who does not need to be ashamed, rightly handling the word of truth'.

Born at Halyburton in Greenlaw, Berwickshire, Fairbairn studied arts and divinity at Edinburgh University, 1818-26. Licensed by the Presbytery of Duns in 1826, in 1830 he became minister in the Orkney Islands, in the parish of North Ronaldsay. Following six fruitful years there he was called, in 1836, to Bridgeton in the east end of the fast-growing city of Glasgow. From there he moved in 1840 to Saltoun in East Lothian. Here, at the time of the Disruption, some 600 of his 800 parishioners joined with him in abandoning their traditional church for an uncertain future.

Called to serve as a Professor in the Free Church College in Aberdeen, within three years Fairbairn's services were required as Principal of the newly-established College in Glasgow. His faithful service to his denomination was recognised in 1865 when he was appointed Moderator of the Free Church General Assembly. Fairbairn received a D.D. from Glasgow University in 1854.

The fruit of his scholarly devotion emerged in a series of works of biblical exposition (Jonah, 1849; Ezekiel, 1851; The Pastoral Epistles, 1874). Accompanying these came three significant volumes which dealt in different ways with principles of biblical interpretation: The Typology of Scripture (1845); >i>The Interpretation of Prophecy, and his Hermeneutical Manual (both 1856). In 1869 he published his classic study The Revelation of Law in Scripture, based on his Cunningham Lectures delivered in the previous year. By that time he had already edited the six-volume Imperial Bible Dictionary (1856). In 1874 he published his Pastoral Theology. The republication within recent years of several of his works bears eloquent testimony to his solid contribution to the Christian church.

The Pastoral Epistles, first published in 1874, is the last commentary written by Patrick Fairbairn, but his first on any of the books of the New Testament. It grew out of Fairbairn's lecutres on pastoral theology to students at the Free Church College, Glasgow, where he served both as Principal and as Professor of Divinity. His purposes in publishing his material were twofold; to benefit students of the Bible, especially ministers and ministerial students, in their grasp and application of the text, and to defend the divine inspiration and apostolic authority of 1 and 2 Timothy and Titus against attacks made by contemporary scholarship. In both aims he succeeds admirably.