Victory of the Lamb: Christ's Triumph over Sin, Death and Satan by Frederick S. Leahy 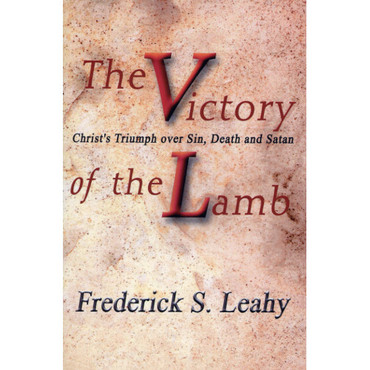 Victory of the Lamb: Christ's Triumph over Sin, Death and Satan by Frederick S. Leahy

At Calvary, the Lamb of God, Jesus Christ, was not a victim of circumstances but a victor over circumstances: ‘The conflict at Calvary was the crucial and determining encounter between the Lamb of God and Satan…At the cross, Christ won and Satan lost, and Satan and his fellow-spirits knew it…There is liberation. Christ has won. Actual victory! That is something to preach!’

This is the theme which thrills all the redeemed in heaven. Frederick Leahy believes that it should also be their constant study while on earth. In this book he traces the theme of Christ’s triumph over sin, death and Satan from the first promise of redemption in Genesis 3:15 to the shout of triumph in Revelation 5:12 ‘Worthy is the Lamb who was slain…!’

The Victory of the Lamb is a companion volume to Satan Cast Out, the author’s much-appreciated study of the biblical teaching on Christ’s victory over all the powers of darkness.

Born in Co. Donegal, Ireland in 1922, Frederick Leahy prepared for the ministry at the Free Church College, Edinburgh, and Calvin Theological Seminary, Grand Rapids. Ordained in Finaghy Evangelical Church in 1949, he joined the Reformed Presbyterian Church in 1953 and served three of its congregations until his retirement in 1988.

In 1967 his gifts as a theological teacher were recognized by his denomination in his appointment to the chair of Systematic Theology, Apologetics and Christian Ethics in the Reformed Theological College, Belfast. He also served as Principal of the College from 1993 to 2002.

His books – Banner titles being The Cross He Bore, Satan Cast Out, The Victory of the Lamb, Is It Nothing to You? and The Hand of God – into which he poured his love for the Lord and the gospel, and his skill as an evangelist and communicator, will endure. Professor Leahy died in January 2006, very soon after posting the manuscript of The Hand of God to the Banner office. He was 83.