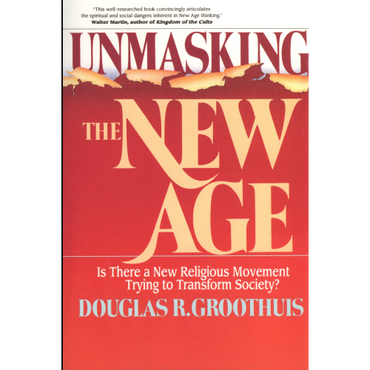 Douglas R. Groothuis (PhD, Philosophy, University of Oregon) is professor of philosophy at Denver Seminary in Denver, Colorado. He has also been a visiting professor or adjunct faculty member at Fuller Theological Seminary (Colorado Springs extension), Metropolitan State College of Denver, Westminster Theological Seminary (California campus), University of Oregon, New College Berkeley and Seattle Pacific University. His articles have been published in professional journals such as Religious Studies, Sophia, Theory and Research in Education, Philosophia Christi, Themelios, Think: A Journal of the Royal Institute of Philosophy, Christian Scholar's Review, Inquiry and Journal of the Evangelical Theological Society. He has written several books, including Truth Decay, In Defense of Natural Theology (coeditor), Unmasking the New Age, Jesus in an Age of Controversy, Deceived by the Light, The Soul in Cyberspace, and, in the Wadsworth Philosophers Series, On Pascal and On Jesus.

What is the New Age movement? Is it a conspiracy? What can Christians do about it? In the last ten years the New Age has shifted out of the counterculture into the mainstream of society. Today its effects are felt in almost every aspect of life—medicine, politics, science, psychology and even religion. Fortune 500 corporations routinely send their managers to New Age seminars to expand their minds and increase productivity. Entertainer Shirley MacLaine has written two best-selling books that chronicle her conversion to New Age. Doctors and therapists increasingly employ healing techniques that are based on pantheistic principles. Even advertisers on radio and television, in tune with New Age ideas, are telling us that we have unlimited potential. Douglas Groothuis explains how the New Age combines Eastern mysticism with Western optimism and why it has become so popular. His thorough, biblical analysis helps Christians know how to respond to this aggressive movement.

I had the pleasure of meeting Dr Groothuis on a fairly recent seminary visit and had the privilege of talking with him in his office for nearly an hour about things philosophical. Contrary to what a previous reviewer intimates regarding this particular book, Groothuis is one of the elite Christian scholars in regards to worldview issues, and his treatment of the New Age in this book, while somewhat dated, is outstanding. It engages in a respectful and sober discussion about the influence of the New Age upon our culture, and even within the church. As such, it is likely to make some Christian readers unhappy since it will likely challenge such readers who might be engaging in certain New Age practices to rethink such participation in light of the potent spiritual consequences.

This book attempts to describe New Age influence in public schools, and in the fields of medicine, science, politics, and American spirituality generally. I especially appreciated Groothuis's emphasis early on that he does not subscribe to a 'New Age conspiracy' which lends solid credibility to his approach. After reading the book, one might come away thinking that indeed such a conspiracy exists, but this is not the conclusion that Groothuis himself appears to subscribe to.
Groothuis's treatment of how the New Age is impacting the fields of science and politics were especially insightful. He properly points out in the field of science that while New Age influences have actually corrected a number of erroneous presuppositions held sacred by many secular humanists and naturalists, this does not compensate for the New Age's abandonment of truth and the resulting chaos it brings to any field of study if consistently followed. Further, Groothuis brilliantly exposes how New Age influences have penetrated the American federal government, with taxpayer money being spent promoting decidedly New Age beliefs and practices. One wonders (though I confess it's no mystery to me) why the more militant church-state separatists haven't been up in arms about such a mixture of taxpayer money and religion, but that's a whole other topic. This sticks out like a sore thumb even more in light of the caveat I discuss below.
Groothuis's treatment of the New Age's contribution to American spirituality (along with its influence in medicine) are likely to be the sections that laypeople might most object to. In these two sections, Groothuis properly goes into some detail in showing how New Age medicinal/spiritual practices are not innocuous or devoid of any spiritual meaning, but in fact promote a spiritual worldview that cannot be harmonized with orthodox Christianity without severely compromising it. A number of these practices are things that all kinds of Christians from the lukewarm to the devout are engaging in today either because they don't know any better, or even worse, because they are not discerning enough to see how these New Age practices are built upon and promote a philosophy that directly contradicts the message of the Bible. Because such practices like yoga, TM, acupuncture, homeopathy, and others have become mainstream even within the church, I strongly recommend this book as an effective countermeasure against the wholesale adoption of these practices by the body of Christ without any discernment.
The one caveat I have about the book is its age. This book was written in the late '80s/1990, and as such, it is somewhat dated. Because the 'New Age' is a movement that makes it up as it goes along and is a rather fluid movement, readers looking for a current Christian critique of this movement might be a bit disappointed in this effort, although I think much of the material is still current. The date of this book is noteworthy because when Groothuis talks about the marriage of the New Age and the Department of Defense, as one example, this is what was happening 15 years ago, not yesterday. What is happening today is quite probably even more pervasive influence of the New Age with more taxpayer money being spent on New Age seminars, medicinal experiments, etc. For the Christian who has grown weary of the recent perversion of the church-state doctrine that has tried to put Christianity in an ever smaller and quieter box, this data from Groothuis makes it crystal clear the new standard of church-state separation is not being consistently followed, and that it certainly seems like we are living in an age of different rules for different faiths. Such a conclusion is formidable ammunition for the Christian seeking to expose the hypocrisy, uneven handedness, and rank bias of those who claim to cherish neutrality on this issue. As a result, I heartily recommend this book for a variety of reasons.