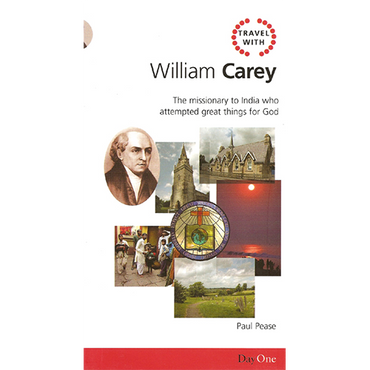 William Carey left school at the age of twelve, yet he was responsible for overseeing the translation of all or parts of the Bible into forty languages and the preparation of six grammars and three dictionaries. He attended no university yet became Principal of the finest college in India in his day—a college still renowned for its excellence nearly two hundred years later. He was sent to India by no government agency yet became the official translator for the British Raj and head of the Department of Languages in the government training centre. His was a life of determined vision, personal tragedy and outstanding achievement; he became the father of modern missions and his work is still enjoyed by millions across India—this was the legacy of the Northamptonshire cobbler.

Paul and Rosemarie Pease and have three daughters, Ellen, Bethany and Anna. Paul became a Christian whilst working on a local newspaper in Bournemouth and soon after began a twoyear study period at Moorlands Bible College. After further study at London Theological Seminary he became pastor of West Kilburn Baptist Church, London, for thirteen years. In 1997 he moved to Hook Evangelical Church, Surbiton, where he now serves as pastor. His interests mainly revolve around his family.
Endorsement
I really wasn't sure what to expect from this book, since I enjoy traveling as well as biographies. This takes the best of both worlds and retells Carey's story as if you are visiting his life through the eyes of a docent in a living museum. It shows pictures of the then and now of the places he lived, retelling the highlights of his life; including significant artifacts from his life, as well as places that memorialized him. Carey was a key player in moving the gospel forward in India as well as igniting the fire in getting the missions movement to gain passion for those who had not heard outside of the Brittish kingdom. He was a brilliant man, and this was a wonderful way to present it. The full color presentation was an exceptional was to illustrate the journey. I will look for more in this series.